It has never been a better time to be a fan of Star Trek. Season 2 of Discovery hits the ground running with 4 electrifying episodes that get the the root  of what makes a great Star Trek episode without sacrificing budget, fight scenes, or cool effects. In this January/February transmission of the Anomaly Podcast, Jen and Angela get to the heart of how Discovery struck us. The last section of the podcast was recorded minutes after we watched episode 4 so it is a true first impression that might match yours. 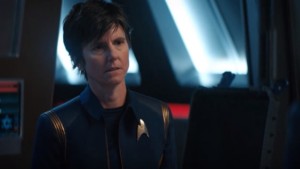 We get a glimpsed of the flagship starship of legend – the USS Enterprise. Captain Pike has been summoned to take command of Discovery to investigate some mysterious signals that have appeared throughout the galaxy and have a yet unknown link to Burnham’s foster brother, Spock. Maybe you’ve heard of him? Some highlights: Set up of season 2 arch with the red lights and red angels. The incomparable Tig Notaro is introduced as kick-ass engineer and duct tape connoisseur Jett Reno. We love Tilly and feel pretty good about it.

Spore drive hi-jinks ensue as our heroes follow another signal to the Beta Quadrant. They find a civilization of humans who had somehow been removed from earth and transported to this M-Class planet during WWIII before Cochran’s historic warp flight. They seem to be stuck in time and are in catastrophic danger. Some pre Prime Directive soul searching leads to a crisis of conscious for more than one member of the crew. And how are the angels involved. Listen and find out. Some highlights: Glad to see Stamets back in the spore drive… maybe. Amazing technobabble solutions to complicated problems. Who is helping Tilly?

Meanwhile back at the Klingons… Ash/Vog and L’Rell are having some issues with uniting a previously and famously war torn and stubborn group of space warriors – what could go wrong? A lot. A lot could go wrong. We get a visit to the Discovery from Amanda (Spock’s mom) and we see that Spock has been up to no-good, but no one really knows why. Some highlights: Black Ops, hallucinations, more fun with spores. 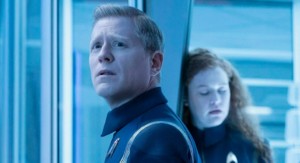 So much to unpack in this surprisingly amazing episode. Discovery gets stopped mid-warp by a sentient being free floating in space and all kinds of things go horribly awry. There are so many story lines it would not make sense to spell them out here. Some highlights: What are you doing to Tilly? Stop it! A character revelation for Saru. More amazing Jett Reno.

Find the complete archives of all our episodes here and here. Never miss an episode—subscribe for free through Apple Podcasts, Google Podcasts, wherever you get your favorite shows.

JenAnomaly Host / Producer / Rogue
“R2 keeps Audrey Hepburn company on my desk in my home office…and I am an Anomaly.”