A Spoiler-Free Review of Skyward by Brandon Sanderson Part 1, Book 1

Part 1 of the “Skyward” Brandon Sanderson Review is Non-Spoiler. 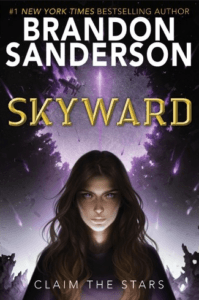 Skyward is about 17-year-old Spensa Nightshade who desperately wants to join the pilots who defend the last remnant of humanity on the planet of Detritus. Her people crash landed on the barren world after being chased across the galaxy by the Krell. An alien species they know virtually nothing about, who has been relentlessly attacked their colony from air for the past 80 years.

The survival of humanity rests squarely on the shoulders of the young pilots who take to the skies to defend everyone total annihilation.
Spensa wants nothing more than to become the best of the best…and to prove her father, a pilot who fled the epic battle of Alta, was not the coward that command says he was. The daughter of a coward is not well respected on Detritus, and is not afforded the same rights or privileges as “first citizens”, or anyone else for that matter. The ostracized Spensa must to fight to survive on her world, fight to enter cadet training, fight to remain there, fight to save her friends, her world, and her father’s reputation. Spensa is good at fighting. According to her Gran, who is a historian of sorts, and story-teller, Spensa is the descendant of Genghis khan, Beowulf, Boudicca, Sun Tzu, and all the warriors of the old Earth stories.

The DDF and Admiral Ironsides have no intention of allowing Spensa to reach the stars, but a dramatic revelation about the circumstances surrounding her father’s actions may become the very thing that the colony needs to win the war against the Krell once and for all.

Sanderson’s research of flight and physics added believability to the imagery he weaves in the reader’s mind. His dog fights are so well written, I felt like I was flying with Spensa’s squadron, “Skyward Flight”. I was able to visualize everything from the expressions on her face as she fights the G-Forces, to the banking, climbing, diving, and rolls she performs while flying.

This is part one of our two part review of Skyward by Brandon Sanderson.  Get the book, read it, then return here next week for part two of our review. Next week, we’ll dive deep into the plot and characters and discuss all of everything in great detail.

Heads up! Angela and I are recording a podcast about the women of Marvel, next week, for a March release. If you have a favorite character, email us and let us know.

Never miss an episode—subscribe for free through Apple Podcasts (and everywhere else).