The Anomaly Podcast, with Jen and Angela 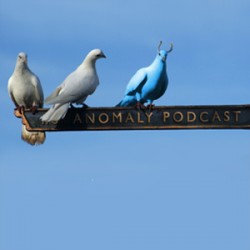 Anomaly is a sci-fi/fantasy podcast, founded by Jen and Angela in 2007.  Their geeky episodes are centered on books, movies, television, games, ren faires, and conventions reports.

Anomaly was nominated, by their listeners, for a Parsec Award for three years. In August of 2015, 2016, and 2018 Anomaly was a finalist under the category of Best Speculative Fan or News Podcast (General).

Anomaly: Something that deviates from what is standard, normal, or expected; an oddity, peculiarity, irregularity, inconsistency, incongruity, a rarity.

The term “Anomaly”, as it is used in this community, was originally coined by Jen and Angela. They use the descriptor to set themselves apart—Anomalies are the halfway point between muggle and geek.

Always worth a listen, these interesting ladies will make you laugh and ponder your own geeky questions!

I only wish I’d found this podcast years ago.

Very fun podcast. Good Information. One of my favorites ones out there.

I am a geeky girl and I love this podcast…keep them coming ladies :)

Outstanding podcast! These ladies know their sci-fi, and they have a great chemistry. A joy ot listen to!

It’s fun to listen to these two revel in their geekdom. As a bonus, there is a bit of info thrown in as well.

JenCo-Founder / Co-Host / Rogue
Jen is a professional graphic designer and a trained voice actress. She was raised on a farm, in the sticks of South Texas. Her father, John Wayne’s twin brother, is the individual responsible for introducing her to all things geeky.

AngelaCo-Founder / Co-Host / Tank
Angela has been a theatre nerd for twenty seven years having worked her way from kid in theatre class to actress to costume designer to director. Her first memories include Wrath of Kahn and Return of the Jedi.

Cosplay and Other Anomalous Pics