Is Star Trek Discovery Really Worth It? A Chat about Episodes 1 & 2

SHIELDS UP! RED ALERT!
Please be aware that this episode contains spoilers for episodes one and two of Star Trek Discovery. 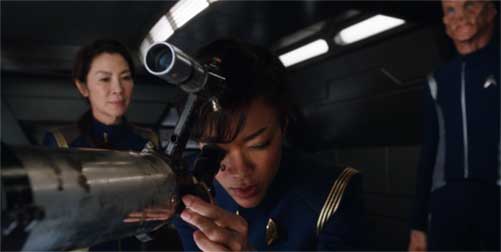 Michael Burnham searches for a vessel hidden in an asteroid field.

It was a diverse group of men and women from all over the US who weighed in on this new show.  I’m proud of the balance of positive, enthusiastic comments, and the thoughtful criticism of all who participated. We hope you find it as fun and insightful as we did. 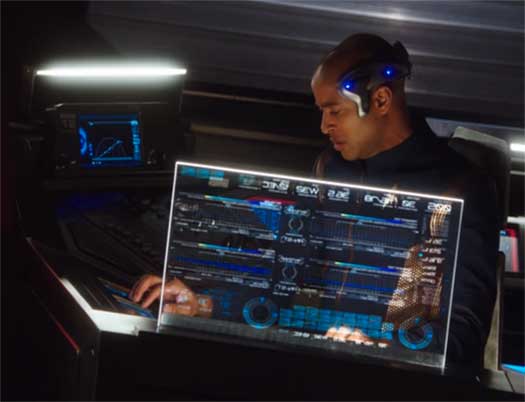 A Lobot-like cyborg, from Star Wars on the bridge

Angela started off this chat about the first two episodes of Star Trek Discovery, by describing her annoyance at having to pay to watch Star Trek through CBS All Access.

“Wrestling with the idea of paying for Star Trek through a streaming service, took away from the excitement and anticipation of the new Star Trek: Discovery television series.”

Did it affect your enthusiasm?

Currently CBS All Access costs $5.99 a month with commercials and $9.99 without them.

But it wouldn’t matter if it was 99¢ a month and commercial free.

It’s not how much the service costs, it’s the principle of the matter.

Putting Star Trek behind a paywall perturbs many fans.

Does it bother you?

Another Klingon reboot. Do you approve?

Currently, the only show that is exclusively behind this firewall is Star Trek: Discovery.

And because of this, some of the people in our roundtable said they felt like they were being hustled because of their devotion to the franchise.

But we’re willing to give Star Trek Discovery a chance anyway.

Despite the annoyance felt by some on our panel, everyone who participated in this episode was very pleased with the first two episodes of Star Trek Discovery.

It’s too early to know if Star Trek Discovery is a show Roddenberry would be proud of.

But we were very happy about the inclusion of ethnically diverse women as primary characters, and are crossing our fingers that the series will continue to build upon that with a positive view of the future.

We were curious about who Daft Punk chick was….

CBS can ensure Discovery’s success if the story writers weave a message of hope and optimism into their future episodes. Because let’s face it, it’s not really Star Trek if those important elements are missing from the series. It’s just scifi.

We’re eager to see if they pull it off in the next few episodes, are you?

What did you think about The Vulcan Hello and Battle at the Binary Stars? Comment below.

Special thanks to Rico Dosti from Treks In Sci-Fi for allowing us to use the recording from his Skype call.

Lay Down Your Burdens (Battlestar Galactica)

If you want to hear more reviews of Star Trek Discovery, each week, let us know below.

JenAnomaly Host / Producer / Rogue
“My dad introduced me to Star Trek The Original series when I was just a girl and I’ve been a fan ever since .”