What is Cosplay!? And is it Contagious?

If you like this article you may also enjoy this Anomaly Podcast Episode: Why We Cosplay,  Costuming 101 or our 2014 Comic Con Convention VideoReport. 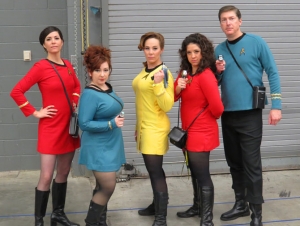 If you rub elbows with geeks like us, “cosplay” is a word you’ve probably heard on more than one occasion. But what the heck is it? What is cosplay?! Let’s start simple and begin with a definition.

Cosplay is the combination of two words: “costume and play.” It’s an art form that involves making or piecing together purchased costumes and props. Individuals who cosplay are called “cosplayers” and their ultimate goal is to represent their favorite genres or characters. To complete the transformation, they may don a costume, apply theatrical makeup, and carry a prop. They then take their art to an event where like-minded people might appreciate their work. In a sense, they put their artistry on display like a painter or sculptor exhibits a piece in a gallery.

Some cosplayers take it a step farther…

…and play the part of whoever or whatever they’re cosplaying as. They stay in-character most of the time. This is where the “play” in “cosplay” comes into effect. There’s a divergence in thought among cosplayers, as far as this is concerned. I’ve heard some say roleplaying is necessary or it’s not cosplay, it’s just costuming. But not everyone who slips into a costume, plays the role of the character they are personifying. They might attempt to imitate the character’s voice to make a child smile or play it up for a video camera, but most of the time they just like to strike a pose for eager photographers.

I only slip into character to strike a pose and/or to greet kids.

I often cosplay as a Jedi. I love the gigantic smile that forms on a child’s face, when I kneel down to talk to them. “Would you like to be a Jedi?” I ask as I hand them my lightsaber. They stand there in stunned silence, their wide eyes transfixed by the blue-green glow of the LED blade. Their parents’ voices are the only thing that breaks the trance. And most of the time, mom and dad are just as excited as the kiddos. “Smile for the picture!” they shout over the drone of the crowd.

To those children, I am a Jedi. And for a brief moment, I feel like one. Making people happy—creating a memory for those younglings— these are a just a few of the reasons why I cosplay and why I find it so enjoyable. I’m sure I’m not alone in that. 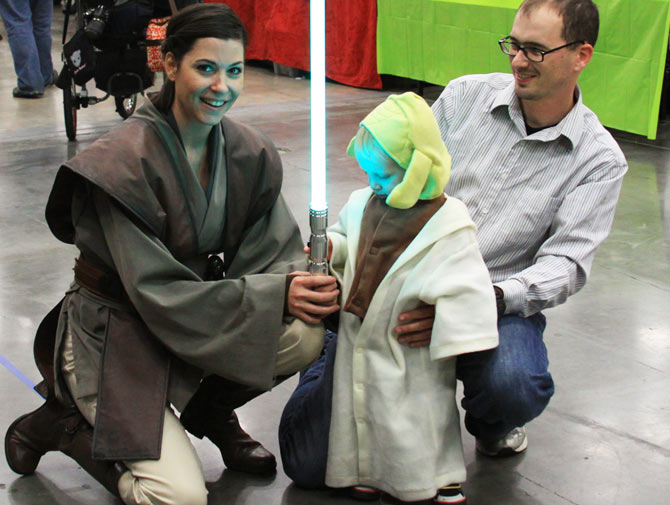 On occasion, people have tried to tip me for standing in a photo with them.

It’s a nice gesture, but I never accept money. Cosplay is my hobby. It’s my creative outlet. It makes me happy and makes kids smile…and that’s payment enough. I think sometimes people mistake cosplayers as the people in costume, standing around trying to make a buck on the Hollywood Walk of Fame or Time Square. That’s a horse of a different color. You should never have to tip cosplayers. But if you want to show your appreciation, ask them about their costume, let them know what a good job they did or request a photo with them.

Cosplayers frequent fan conventions like Comic Con and DragonCon. Like Halloween, a convention (or con) is a sense of occasion. It’s a big nerd party! It depends on the venue of course, but if you attend a large event like DragonCon, and you’re not in costume, you’re more than likely in the minority. But that’s okay. Some people are the cosplay artists and some are the gallery guests.

Often, a seasoned cosplayer’s work rivals the costume or props they’re recreating. But it doesn’t matter how much money a person invests in their project or how much talent they have. It’s about having fun and being creative. And that’s all that matters.

Men and women of all sizes and ethnicities cosplay.

I’ve seen awesome plus size superheroes, a beautiful African American Maleficent and cute little girls and women dressed as male characters, like Doctor Who. They are paying homage to a character, possibly their favorite, and having a blast in the process. It doesn’t matter how closely they may or may not resemble them. They’re representing their fandom, expressing themselves creatively and having a great time. Cosplay is for everyone!

I hope I’ve answered the question, I’ve seen plastered all over the internet. What is Cosplay? To recap: It’s art. It’s fun. It’s for everyone. And yes…it is contagious, but in a good way. ;)

This post is the first in an ongoing Anomaly series on cosplay. Next week I’ll be elaborating on Why on Earth anyone would want to cosplay. Be sure to subscribe to the Anomaly Blog by email and/or sign up for our newsletter .

Tips For Posing with Cosplayers

Asking for a photograph is like giving a cosplayer a thumbs up or a high-five. If you ask permission, before you take the shot, you’ll get a better picture. The cosplayer in question will strike an awesome pose on their own, with you or other cosplayers.

Some costumes and props are not as sturdy as they look. I once met a “Thor” who had an embarassing cape dilemma; everytime he posed with people who put their arm around him, his cape fell on the floor. When posing with a cosplayer, feel free to ask if you can put an arm around them… they might just say “absolutely”. Shoot, Thor might even let you attempt to lift Mjölnir.

Sometimes cosplayers go to a convention and they never bring home any photos of themselves. I’ve met a few very cool con-goers who’ve tweeted photos of me. After taking my photo, they asked me for my Twitter handle and when they posted, they tagged me in their Tweet. BOOM!  Just like that, I had a great picture of myself in all my Jedi awesomeness. And my convention friend has a new Twitter follower. 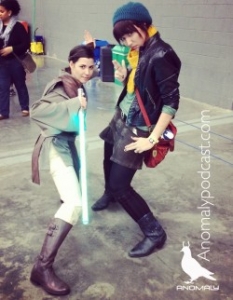 If you like this article you may also enjoy this Anomaly Podcast Episode: Costuming 101 or our 2014 Comic Con Convention VideoReport.