My Journey to the Dark Side: Cons and Costumes 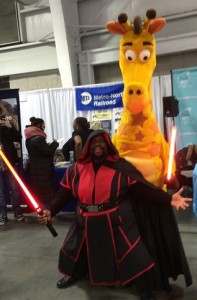 Shortly after I last wrote about my adventures with Saber Guild: Empire Temple, I attended my first event: Play Fair 2016!  Play Fair is the part of Toy Fair that is open to the public.  Well, the part of the public that pays for a ticket.  Basically, you don’t have to be an industry insider to get in.  And, as you might guess, it is a con aimed specifically at families with young kids.

We were there demonstrating Hasbro Blade Builders, taking photos with kids, running Padawan training sessions, and raising money for St. Mary’s Children’s Hospital Network.  Since I’m not yet an official member, I was “squiring” at the event – manning the donation table, talking about the group, minding the line, etc.  It was a very long and very cold day in New York, but such a great time.  And in just the first day, we nearly met our fundraising goals for the entire weekend.  Plus, this was my first con as an “exhibitor” and let me tell you: green rooms are awesome.

Until I have my costume done and am approved as an official member, I will continue to squire at events, but I’m very much looking forward to that.  Empire Temple has a busy spring and summer coming up, and logo t-shirts are a lot cooler that several layers of linen. 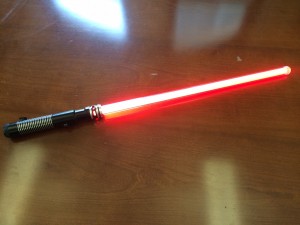 In the meantime, my precious has arrived.  It’s pretty simple, but I really like the way it handles.  It will also be very easy to turn it into a saber staff if/when the time comes.  But I have to get more comfortable with a regular saber first I think.  Although, my first staff class is tomorrow, so we’ll see if I really do fall in love with it.  But, once there’s a saber, a costume is not far behind…

Saber Guild is a charity organization, but to be honest, the barrier to entry can be pretty expensive when you’re ready to become an official member.  The costuming standards are such that you can expect to spend a couple hundred dollars minimum putting a costume together.  The most basic saber will run close to $100.  A basic jedi kit (inner tunic, outer tunic, obi, and tabards) can be purchased for about $150.  You can find a belt and necessary accessories for about $90.  Then there are pants and boots.  That’s close to $400 for the most basic costume, and then you still have to be approved by the global costuming council.

Personally, I’ve been trying to spread out the spending.  My goal for costume approval is July, because one of the biggest shows of the year is Star Wars Night at the Brooklyn Cyclones at the end of the month.  I have my saber, black boots, and black leggings.  I’ve ordered arm wraps and a belt with pouches.  Which leaves the “kit,” for which I have commissioned Anomaly’s own Anne.

While I am going Dark Side, Anne is a Jedi through and through, and has taken on the challenge of designing and hand-making her own costume, from the pattern up.  She’s doing her own embroidery! 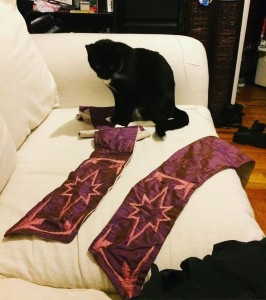 It’s absolutely beautiful and I cannot wait to see it completed.  She’ll be ready to submit for approval this weekend.

My Journey to the Dark Side is a monthly series chronicling Sue’s experiences becoming a member of Saber Guild: Empire Temple.