The final post of my first watch of The X-Files. I’m kind of sad that this is my last post in this series. But then again, I have a large list of episodes to catch up on. I don’t think I as a writer could have the patience for that when there is SO MUCH TV OUT THERE. Too much televisiooooon.

Again, this first watch correlates with Chris Carter’s 10 Essential Episodes from Entertainment Weekly. If you would like to read the previous two reports, you can find the first post here and the second post here. Enough stalling–let’s chat X-Files!

In this last round, I’m discussing “Memento Mori,” “Post-Modern Prometheus,” “Bad Blood,” and “Milagro.” BUT! I’ve got a secret surprise review down at the bottom, because I just couldn’t resist putting this must of my own on the list.

Spoilers for those who have not seen the X-Files.

The truth is below this image.

Wiki summary: Fear for Scully’s health sends Mulder to investigate the bizarre circumstances that may explain her mysterious abduction two years ago, while Scully takes a more practical course to quell her illness. 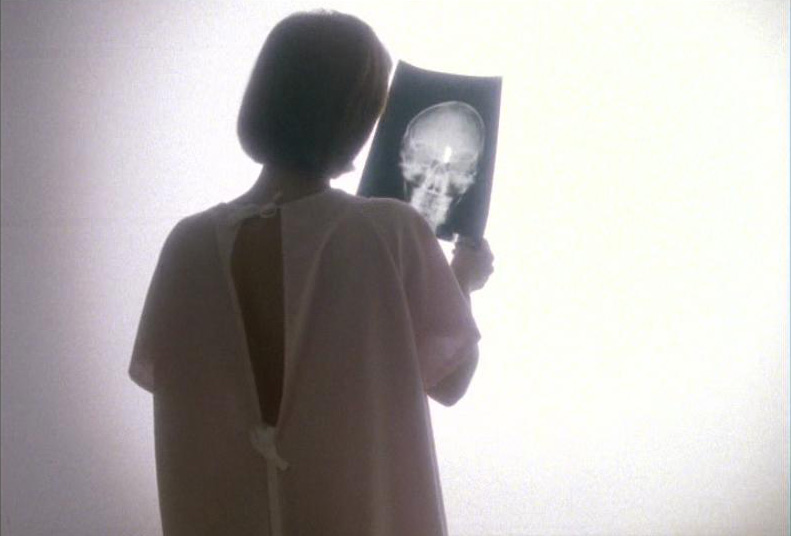 This one was full of tender Mulder and Scully moments, but there was a major problem I had with it. I had no idea what the frak was going on. Even though my goal in this first watch was to avoid going to Wikipedia for more detail, I found myself with my attention divided between TV screen and my internet browser looking up connections to this plot. Apparently Scully was abducted and her ova was removed, and there are guys called the Lone Gunmen, and there were clone people. But again, as a first time viewer, I’m not quite sure this is a good episode for an essentials list for first time watchers. Maybe if you had watched the show as it aired and needed a refresher before the mini-series, sure. Baby X-Files watchers, though? Not so much.

Wiki summary: Filmed in black-and-white, Mulder and Scully investigate a letter from a single mother that leads them to a small town where a modern-day version of Frankenstein’s monster lurks, Jerry Springer is an obsession, and Cher plays a significant part. 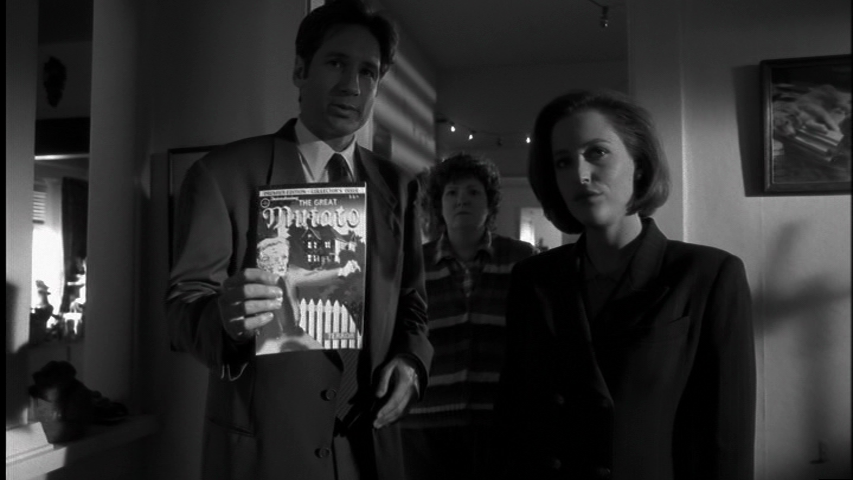 This was simply a fun episode that has it’s own little spin on the Frankenstein mythos, the title referencing Mary Shelley’s subtitle for her classic work. While “Post-Modern Prometheus” reminded me a lot of Burton’s Ed Wood and Edward Scissorhands in both its cinematography as well as it’s heart within the campiness. While I am not a fan of Tim Burton in the sense that I don’t believe he knows how to craft characters and story, I do think that he has an eye for visuals and knows the basics of the outsider trope, and the creative team behind this episode were able to channel that very well. It was a light-hearted and sentimental romp that ends with Mulder and Scully dancing. Oh! And Cher. Everything’s made better with Cher homages.

Wiki summary: While investigating bizarre exsanguinations in Texas, Mulder kills a teenage boy whom he “mistakes” for a vampire. Awaiting a meeting with Skinner, Mulder and Scully attempt to get their stories “straight” by relating to each other their differing versions of what happened during their investigation. Gillian Anderson voted this her favorite episode.

Let it be known that whenever I read or hear this title, the Taylor Swift song gets stuck in my head. “‘Cause baby now we got ba-a-ad blood. Hey!”

Okay, with that out of the way, let’s get back to business.

This is noted as “Vince Gilligan’s signature episode” by Chris Carter, and I can see why. It is one of the much needed comic episodes after a long line of dramatic stories in this 10 episode list. I loved the “Rashomon”-like approach, but very stylistic based on Mulder and Scully’s respective points of view. While we are very used to seeing the dichotomy of their relationship, I did not expect to see the characters’ own analyses of their partnership. And I have to say, after years of being exposed to British vampires that can flatten you with their beauty, it was really great to see simple country vamps from General-Small-Town, Texas. The only thing it was possibly missing was the only markers of a town in Texas: a Dairy queen, a church, and a single gas station. I loved it. Loved it, loved it, loved it. The end.

Wiki summary: A series of murders takes place where the heart has been removed from the victims. A writer (John Hawkes) that lives next door to Mulder is writing a novel about the murders before they actually happen. Scully finds herself confused and drawn to the writer, who has a romantic interest in her. 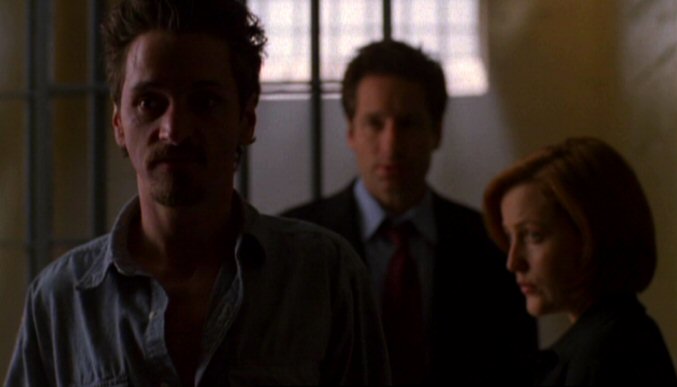 This episode was very well-written and the acting was beautiful, especially that of Gillian Anderson.

Even though I find it fascinating that the guest protagonist was really more of an antagonist, I did not sympathize with him. At all. He was a stalker and knowingly controlled Scully. If you’ve watched Jessica Jones, you’ll recognize how Kilgrave-y this character is. His sacrifice at the end did not make me sad. And I will admit to crying over very problematic characters. The Phantom of the Opera is a homicidal stalker man who kidnaps his favorite ingenue, and I cry every time Christine leaves him at the end. With Milagro writer-stalker-guy, I didn’t care.

Wiki summary: With Mulder trapped in a car by a seemingly deranged man (Bryan Cranston), Scully races to determine if the man is suffering from a deadly illness—and if Mulder is in danger of becoming the next victim of a government virus. They later discover that the man is a victim of an accident caused by a government sound device short-circuiting; the device released a frequency the same as the human skull, causing pressure to build up until it blows. They attempt to save the man by puncturing his inner ear, to relieve the pressure at the cost of his deafness. Unfortunately, the man’s head explodes right after Mulder parks.

If you have listened to Anomaly Supplemental, you will know that Breaking Bad is one of my favorite all-time TV shows, right next to Slings & Arrows and Buffy the Vampire Slayer. And if you are aware of your TV trivia, you’ll know that Vince Gilligan wrote and produced this episode and cast Bryan Cranston as Crump, whose performance left such an impression on Gilligan that he had to hire Cranston as the infamous Walter White. So needless to say, this episode was a must-watch for me.

I loved it. I personally feel that this episode had what Milagro was missing in terms of “sympathy for the devil.” Crump is an anti-Semite, he holds Mulder hostage, and he believes the government is out to get him. However, when the man meets his demise, I as a viewer felt sadness. I would never want to have a conversation with this man, but did that justify his death? What does it say about our humanity when we feel for a deeply flawed,if not deplorable [fictional] man? It’s a question that Gilligan goes on to ask in his career since his wild X-Files ride. I’m very sad he’s not writing an episode for the mini-series.

What about you, readers and listeners? Is there an episode that you consider an absolute must watch? Agree with any of the opinions I have? Respectfully disagree? Are you looking forward to the mini-series airing this Sunday? Comment below or start a chat on our Facebook page!

KCCo-Host/ Anomaly Supplemental
After misspellings of her first name and confusion with her middle name sounding like “Klingon,” she now uses her initials as her nom de plume.
More
By KcGeekChic|2016-12-22T14:24:27-06:00January 21st, 2016|Anomalous Musings, Sci Fi, The X-Files, TV episode review|0 Comments