It wasn’t like meeting a celebrity. We were just meeting our BFF, Felicia Day

I had the chance to attend a Felicia Day Panel at Wizard World Austin in November of 2017, but before that happened, Angela and I had the pleasure of meeting our geek girl hero. If you’ve been living under a rock for the last decade or so, Felicia is the creator of The Guild, and Geek & Sundry, and has been on awesome shows like Supernatural, and Mystery Science Theater 3000.

We’ve been trying to get an interview with Felicia Day for years, but alas we haven’t made it past the people representing her. One day! One day, we will welcome her to the Anomaly Podcast. :)

We may not have landed an interview, but we were able to take a selfie with Felicia, congratulate her on the birth of her baby girl, show our solidarity by declaring that we too are gamer moms, and let her how much of an inspiration she’s been to us over years.

I thought I’d be nervous—that I’d stutter and stammer—but when it was our turn to speak to Felicia, I felt as though we were dropping by to meet our good friend. Her friendly, open nature put us both at ease. Felicia’s one of us, and I think she wants us all to know it.  I came away from the experience feeling like she was glad to meet each and every one of her fans. 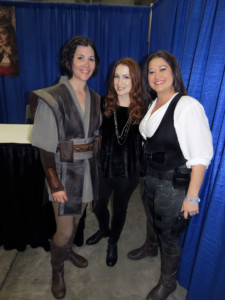 Thank you, Felicia. Thanks for being one of us and for coming to Wizard World Austin.

During the panel, I had the opportunity to thank Felicia for representing female gamers, and for taking all the flack that came her way when she spoke out against the misogynistic gamers during “Gamergate“, in which she said,

“Exist and represent yourself the way you want to exist as a woman who loves games, not as a reflection of what other people think or want of you. You will change minds by BEING. Show, don’t tell.”

Because I didn’t want to be a “Debbie Downer”, I also asked a fun question. A question about dressing her cute little geekling up in costumes, which she seemed to enjoy talking about.

I have had fun dressing my son in fun costumes over the years. He loves them. I’m currently making him a Dawnguard helmet, from Skyrim. It’s not complete yet, but he wears the half-finished thing to the grocery store, while he’s watching TV, and as he’s playing LEGO Lord of the Rings.  It’s adorable. I’ll share photos when it’s all finished, I promise.

There were a bunch of great questions from fans during this panel.  Austinites are awesome. Even the baby geeklings asked wonderful questions!

If you liked this Anomaly episode, you might also enjoy these panels: The Men of Trek, The Women of Trek, Sean Astin Panel, Jason Isaacs Panel, and Sue’s Dragon Con Panels.

JenAnomaly Host / Producer / Rogue
“I finished Mass Effect II while on maternity leave…and I am an Anomaly.”