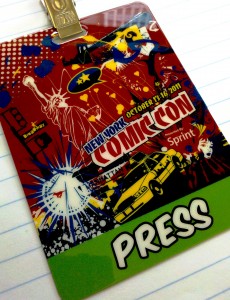 Hi, I’m Sue. I attended 3 conventions in 2 months, and I am a tired Anomaly.  This extra special Anomaly episode is full of news out of New York Comic Con.  From television, to documentaries, to short films, to graphic novels, to video games – there’s a little bit of everything.

As I say in the episode introduction, this is by no means comprehensive coverage.  With just Anne and myself convering con, there was certainly no way that we could make it to everything, so there was plenty of stuff we did not get to.  Instead, you’re stuck with report from the things that we found most interesting.  We’re really excited about the news in this episode, and hope that you will be, as well.

There’s is a lot of information in this release, so here’s a bit of a guide to help you out:

11:04  –  White Room: 02B3
The world’s first 360-degree film, directed by Greg Aronowitz and produced by Kim Evey and Tory Ireland Mell.  The film is scheduled to premiere at festivals in 2012.

14:06  –  Days Missing
Graphic Novel series from Roddenberry Entertainment. Vol. 1 and 2 are currently available, and Vol. 3 is in production.

18:24  –  Tale of Sand
From the Henson Company and Archaia Entertainment, a graphic novel based on a never-producer screenplay of Jim Henson. The current release date listed on Amazon is January 3.

23:10  –  Interview with Henson Archivist Karen Falk and Archaia Entertainment Editor-in-Chief Stephen Christy
This post-panel interview was a wonderful treat for me, and has some added information about the Tale of Sand graphic novel. There are also some mentions of Henson exhibits: Jim Henson’s Fantastic World at the Museum of the Moving Image in Queens, NY and the Center for Puppetry Arts in Atlanta, GA. The Center’s Jim Henson Wing is currently scheduled to open in 2014. Also, for information on other Henson Exhibitions (and projects, for that matter), there’s the Jim Henson Legacy.

44:11 – Mass Effect 3
Also from Bioware, the next installment in the RPG third person shooter, coming in March.

46:49 – Once Upon A Time panel
Currently airing on ABC.  This coverage includes a mention of Emma Caulfield’s (Anya on Buffy) web series “Bandwagon.”

52:14 – Felicia Day panel with Sandeep Parikh and Chris Hardwick
Including some information from The Guild and Dragon Age: Redemption.

Remember to come on back to Anomaly later this week for more stuff out of NYCC.  On Wednesday, a recording of a panel called “Screen Future: Gaming, Comics, and TV around the world and 5 years from now.”  And on Friday, an interview with actress Ashley Eckstein.