Download Episode (right click and save)
If you enjoy this episode, check out the Shaun Astin Panel as well as our  2012 and 2013 reports »

Austin Comic Con is so Wizard! 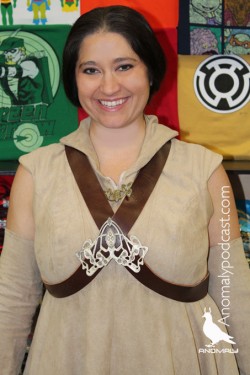 In this edition of Anomaly, Jen and Angela describe their cosplay adventures at the Wizard World’s Austin Comic Con, in (you guessed it) Austin, Texas. For the past three years, Anomaly has had their own booth. This year, however, was the first year they purchased a legit “Small Media” booth. Their goal every year is to meet potential listeners and befriend other fan communities and podcasters. The Anomalies also spoke with a few other podcasters like Carlisle from “Punching through the Walls of Reality”, who they had met the previous two years. You’ll find a link to all of these groups at the bottom of the page.

Once again Kasey, Sith Jen and their good friend Rico, from Treks In Sci-Fi, joined them. Also included in the show notes for this episode, are the reports recorded in their booth at Austin Comic Con.

Make sure you scroll to the very bottom of the page for links to our previous Comic Con reports and vender sites. Very soon the Photo Gallery will be populated with Austin Comic Con 2014 pictures. A high res version of this report will be added to the Video Gallery as well.

Thank you for watching! If you enjoy Anomaly, please consider leaving a review on iTunes or rate the show on Stitcher Radio. And, if you would, please share this video with your friends.

Thanks for watching and sharing!!