Ghostbusters 2016 | I Ain’t Afraid of No Trolls

Real Talk: I have been on board with the Ghostbusters reboot since it was a twinkle in Paul Feig’s eye.  But yeah, there was a little bit of trepidation.  There always is when something you love is rebooted or restarted or re-whatevered years and years later.  But I love Ghostbusters.  And I even like Ghostbusters 2 (because being miserable and treating other people like dirt is every New Yorker’s God-given right).  And I love funny women.

Settle in, cause it’s gonna get personal.

As a young geek girl in the 80s and early 90s, I really didn’t belong anywhere.  It wasn’t cool to be a geek yet.  The cool kids didn’t like me because I was a geek, and the geek kids were gatekeepers because I was a girl.  I was told – constantly – that there’s no way I could possibly like Star Trek, Star Wars, Ghostbusters, X-Men, etc, because of my gender.  Just to be accepted by other geeks, I had to jump through trivia hoops to “prove myself.”  But when Halloween came around?  Boy howdy!  I better dress up as something “gender appropriate!” Because “girls can’t be Ghostbusters!”

Fast forward to 2000 and Gilmore Girls and my first encounter with Melissa McCarthy on TV.  I’d identified with characters on TV before, but none of them ever really looked like me.  Or were shaped like me.  That meant a LOT.  Because I was the theater kid who was told I didn’t get roles because “you don’t look the part” or  that they “needed someone smaller and cuter.”  I had long since come to terms with the fact that bigger girls weren’t wanted on stage, but there was Sooki every week.  That character meant the world to me.  And since then, I may have put a little to much pressure on Ms. McCarthy (in my own head) as someone who so closely represents me in TV and movies.  (Not saying I love everything she does, but I will see everything she does.)

FF once more to casting announcements.  A woman like me is a Ghostbuster.

Before I’ve even seen the film, I can say with all seriousness: Abby Yates has not ruined my childhood.  She has validated it.

There’s been a lot of hate and vitriol spewed all over the internet about this film.  People are very protective of the things they love.  I get it.  But no one is taking away the 1984 film.  And a whole new set of people are being invited to the party.  I’ll admit that my reaction to the positive early reviews of Ghostbusters was first relief and then joy.  Because the character that has come to mean so much to me just from production stills and online marketing is going to be in a good movie.

And I will be the first in line for the first showing tomorrow.

And if I can feel so emotional about representation in movies when I’m in my mid-30s, imagine what this film (and others like it) will mean to future generations of geek girls. 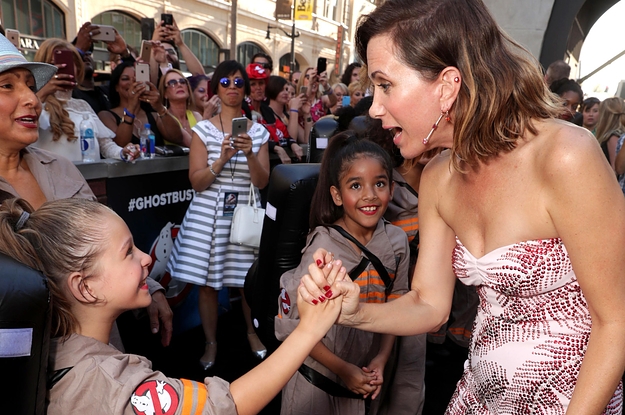