By this time, you’re probably aware of the human-sized signs that were all over New York Comic Con this past weekend with their new Anti Harassment Policy.  In case you’re not, here they are (click to embiggen): 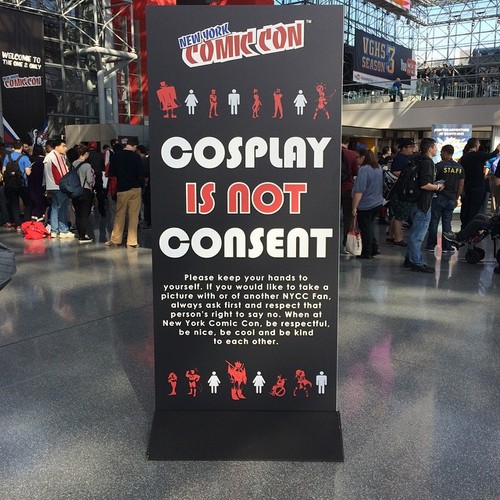 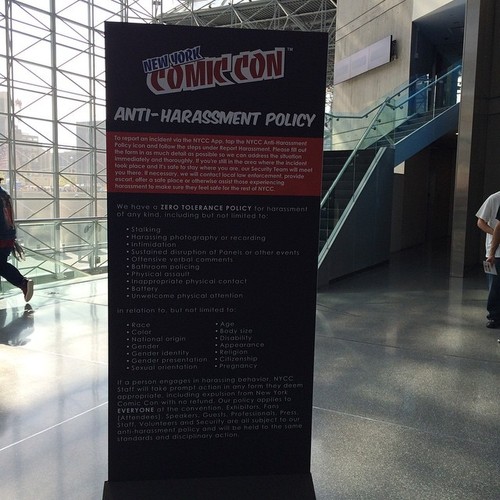 As you can see, one side says “Cosplay is Not Consent” with a short paragraph about keeping your hands to yourself and asking permission, and the other side shows the full Anti-Harassment Policy.  From what I’ve seen on the internet, reaction to this has been almost completely positive.   And I want to talk about this a little bit more.

How This Came To Be

Geek and Convention culture as a whole, and New York Comic Con specifically, are not strangers to incidents of harassment.  Here’s just one example.  Many conventions have been blasted in the past for having a very broad or general harassment policy, or burying it on their website, or a combination of the two.  ReedPOP, the presenters of NYCC, apparently decided that they wanted to change that and lead the way.  This past summer they reached out to The Mary Sue for help, who in turn reached out to their readers, and essentially crowd-sourced the new Anti-Harassment policy.

When they were done crafting the Anti-Harassment Policy, NYCC also did their part in publicizing it online.  They sent an email to attendees, they posted about it on Facebook, they made it very easy to find on the official convention website, and they even added it to their schedule app.  And, of course, The Mary Sue posted it as well.  (You can read the full policy here.)

A lot of people were already very proud of NYCC, but then we arrived at the Con.  I, for one, was not expecting to see 6-foot tall standing signs about the Anti-Harassment Policy, and they were everywhere.  Everywhere!  In addition to that, there were 3 different slides on the screens in the panel rooms. 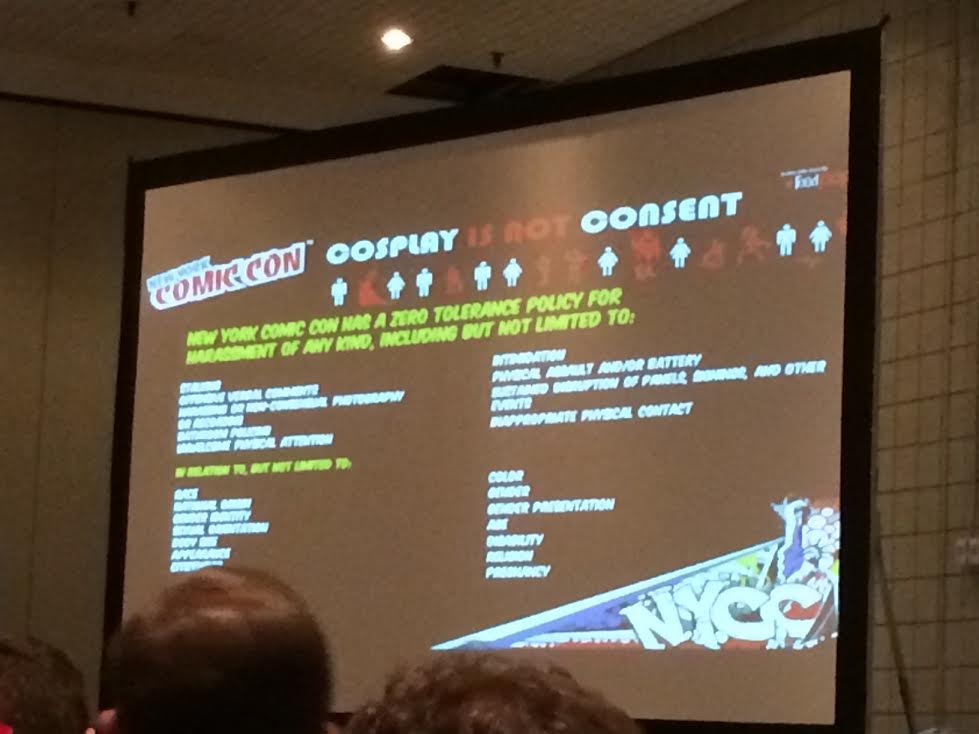 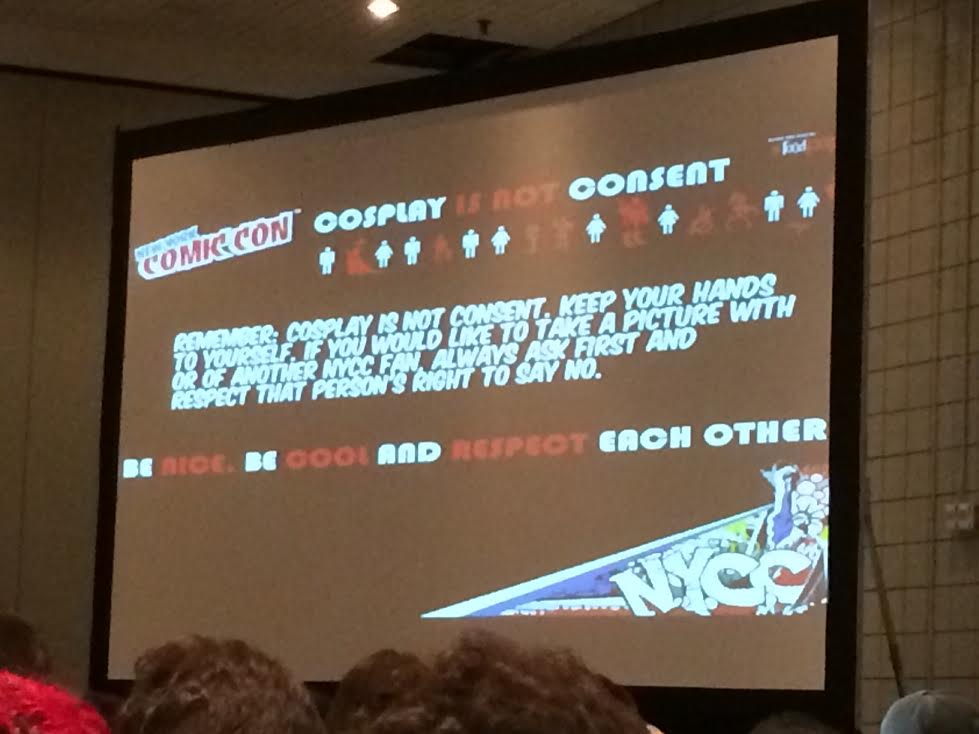 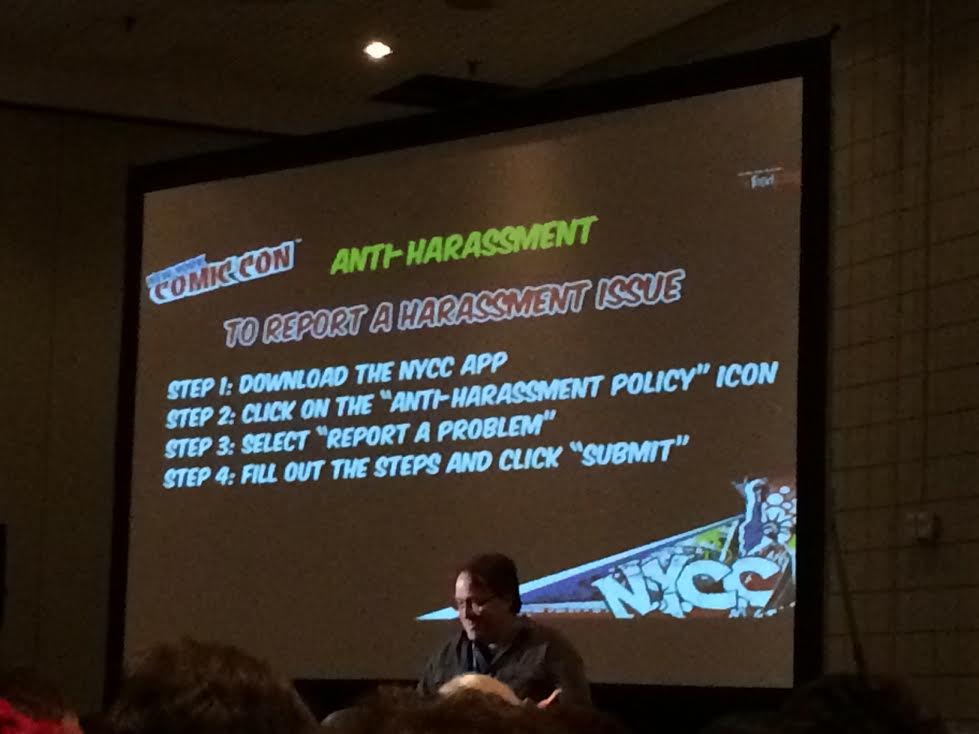 Even cooler was that you could report an incident right from the app!  It included instructions, asked for details, said that security would meet you if you were still in the area…  And, because sometimes filling out a form can just take too long, it also gave the location and phone number of the convention center’s security office. 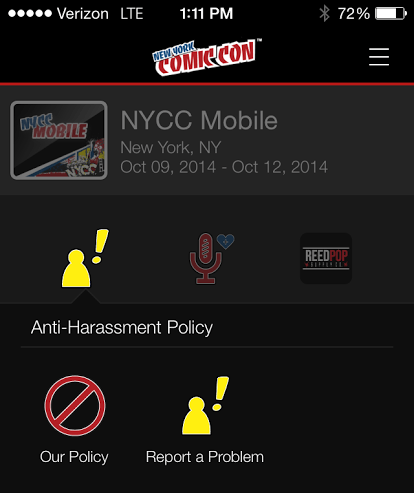 In terms of programming, there were more panels on diversity in media and fandom that I’ve ever seen before at NYCC, including one specifically on harassment in geek culture.  It’s pretty clear that I was very impressed.

Why This Is Important

We all need to be aware that harassment is a problem in geek culture.  It’s a big one.  And a big media convention is shining a very bright light on the problem and declaring it unacceptable, and making it incredibly clear that they’re taking it seriously.  That’s huge.

NYCC’s Anti-Harassment Policy is not just a “sexual harassment” policy.  It includes things like continuously disrupting events, non-consensual photography, bathroom policing, and offensive verbal comments. After all, there is not only one type of harassment.  This applies to every single con-goer and should make everyone feel more comfortable.

As I said at the very beginning, the response I saw online was almost entirely positive.  There were, of course, people saying that “signs won’t stop perverts” and “people don’t read signs so there’s no point” and “what a waste of money” and even “this is an example of political correctness gone too far.”  Oof.

Here’s the thing.  If someone’s sole intention in attending a convention is to grope someone else, then no, this sign will not stop them.  But here’s what it does do:  It lets everyone know what behavior in unacceptable.  It encourages reporting.  It encourages people to speak out (because they know the convention has their back).   And, hopefully, it will discourage anyone from “trying something” because they heard about someone else doing it.

Anecdotally, I can tell you that Anomaly’s own Anne said, online, that she saw a real difference in how cosplayers were being treated this year by other attendees.  I saw several people, cosplayer and non, saying things to photographers who didn’t ask permission before snapping some photos.  And I even saw one friend say to another, “Not cool, bro” when he started cracking “jokes” about a crossplayer.

Of course, my experience is only my experience.  So I emailed a couple people at both ReedPOP and The Mary Sue to see if there would be any quantitative analysis done regarding the effectiveness of the new policy and signage.  I heard back from the PR Manager last night:

We do not have plans to officially quantify our policy other than to share that we had only a few reported incidents and nothing drastic leading us to believe that our policy was certainly effective. Additionally, we received grateful feedback from our fans throughout the weekend thanking us for putting the policy in place and posting it prominently.

So I’m going to call this a success.  Good job with this, NYCC.  You’re making me proud to be a New Yorker.

ReedPOP has already stated that the same anti harassment policy will be in effect for all of their future events.  And I hope other conventions will follow suit.