My Journey to the Dark Side – So It Begins

About two years ago, my good friend Amy started attending open lightsaber rehearsals with Empire Saber Guild. Try as she might to get me to join her, my introverted self always made excuses. As I am wont to do with most social things. (Plus, as anyone who’s listened to me talk about Star Wars has heard plenty of times, I’ve always been more Trek than Wars.)

So, what is Empire Saber Guild?
Saber Guild is “a non-profit, all-volunteer, international organization that specializes in lightsaber stage choreography and education.” The New York chapter is Empire Temple. While ESG appears at conventions and private events to do performances and Padawan Training, there is also a big focus community and charity, performing at libraries, community centers, and hospitals. And in 2015, ESG alone raised over $8000 for charities around NYC and the US. 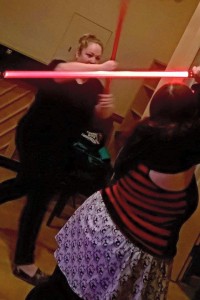 I am NOT holding that saber by the blade (ouch!). The hilt and blade just both happen to be red.

Flash forward to this past December when you couldn’t throw a rock without hitting some Star Wars hype (for good reason). And Amy, now better known as Kamyos Rehnard and a member of Jedi Council, invited me to ESG’s media day before the premiere of The Force Awakens. And I dragged Anomaly contributor Anne along with me.

And that started me on my path to the Dark Side…

Anne and I have been attending lightsaber rehearsal for the past few weeks, beginning to learn some forms and even a few tricks. Getting used to handling the sabers, and getting comfortable with the group. And we both are planning on officially joining.

Saber Guild is Lucasfilm Ltd recognized and is considered Lucasfilm’s preferred lightsaber choreography group. In order to be an official Saber Guild member, you must have a full costume and character that is then submitted and approved by Lucasfilm. And boy howdy are there costume standards. It’s not going to be an easy process. 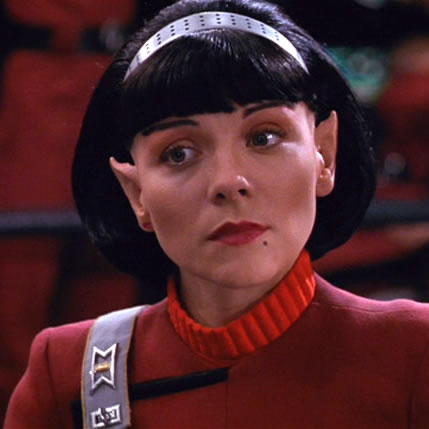 In fact, the easiest part for me was deciding between Jedi and Sith. Sith. No question. And, being the contrarian that I can be, I had to give a nod to the other Star franchise in my choice of character name: Darth Valeris.

But first thing’s first: Getting my own saber. There are SO many options, so many designs, and so many price points. Ultra Sabers, Saber Forge, Vader’s Vault, Parks Sabers…  Literally the most important thing that both Anne and I did was attend some saber classes without our own sabers, because people always bring extras. Each week, we would use a different hilt and blade length to test things out. Over these weeks, I’ve learned what kind of movement feels the most natural to me, and how I like to use a saber and that drastically changed the saber I wanted to buy for myself.

Originally, just from an aesthetic perspective, I was super into Ultra Saber’s Dark Menace. But I like to do spins with my saber – that hilt would not work for me. I learned that I would need a shorter hilt with a really good choke. Also that I would want a shorter blade, buy “heavy grade” for combat. Sticking with Ultra Sabers, since the rest of the Anomaly crew has always had good experiences with them, I became drawn to the simplicity of the Dark Apprentice LE v4 (with red LEDs, of course). And, even with a couple hilt design and blade upgrades and the covertec system included, it was about half the cost of what I was expecting to pay when I was expecting to buy the Dark Menace. So, in true geek fashion, rather than just be happy with the savings, I also ordered a Grab Bag saber with teal (or “Sun Rider’s Destiny”) LEDs, because I assume I will eventually also have a Jedi character. (And I’m still paying less than if I had tricked out the Dark Menace).

For comparison, Anne will be going Light Side and was really drawn to Saber Forge’s Consular model. And I totally get why – it’s an absolutely beautiful saber, and it was super easy to handle. But, for me, there’s a little too much going on in the choke. So I’m confident that I made the right choice for me.

And now, I just have to wait for the sabers to arrive. For some reason, Ultra Sabers is really backed up right now.  ;)

I’ll be doing my first event with ESG this weekend at PlayFair, anyway. And I’m looking forward to learning more about stage combat, these charity efforts, SW-universe costume designing and more. And sharing those discoveries.

My Journey to the Dark Side is a monthly series chronicling Sue’s experiences becoming a member of Empire Saber Guild.