An Outlander Review with Jen, her Mom and her Sister 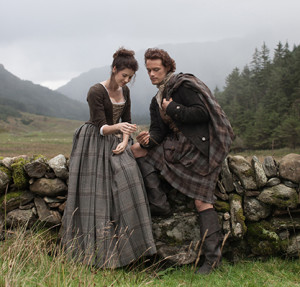 Hi, I’m Jen and this is Anomaly‘s first podcast episode on the Diana Gabaldon’s Outlander series. I recently sat down with my sister and my mom to discuss the time traveling novels. Our Outlander review is a very informal discussion, had over a bottle of wine, right after we watched the first two episodes. Hopefully, you’ll feel as though your chatting with a few friends.

I don’t know about you, but I like stories about gutsy women. Don’t give me shrinking violets… and please, no Mary Sues. I want to read about believable characters who make mistakes, have very human flaws and strengths I can admire. Strong characters don’t have to be butt-kickers who save the universe all on their own, with nothing more than a machine gun and awesome martial arts skills. Those characters have their place and they’re cool too, but strong characters are also mothers struggling to raise their children during tough times with nothing but a milk cow and maybe a hen. The Outlander series is full of strong characters–both men and women! One of the strongest, is Claire Randall.

At the start of the series, we find Claire, a British combat nurse, and her husband Frank, an Oxford history professor who worked for MI6 during WW II, on their second honeymoon to Inverness, Scotland. The Second World War has just ended and the couple is trying to reconnect after a long separation. On the trip, Frank also intends to research his family history. While Frank studies piles of historical documents, Claire, having an interest in botany, goes on a search for herbs near standing stones on the hill of Craigh na Dun. She hears a buzzing noise near the stones and when she moves closer to investigate, she is transported two-hundred years into the past. After a string of harrowing events she meets a man who she eventually falls in love with: James Alexander Malcolm MacKenzie Fraser. He’s a well-educated, Scottish landowner and warrior; a natural leader on and off the battlefield.

I like the idea of traveling back in the past, but I have to ask myself: would the people I met accept me for who I am or fear me because of my modern education, my principals and my habit of speaking my mind? Gabaldon explores the possibilities through Claire, a bold, no-nonsense, intelligent woman, who isn’t afraid to tell you exactly what she thinks. The reflex gets her in trouble on more than one occasion, and saves the day on many others.

I’m aware that my repeated use of the term “romance novel” probably ruffles the feathers of some hardcore fans of Outlander  (like my sister). I’m sorry. Outlander is very difficult for me to define—and if it’s hard for me, I can only imagine how difficult it is for book stores to categorize them. How do they know what section to place them in? Sci-Fi/Fantasy? Historical Fiction? Romance? Adventure? The answer is: all of the above…it’s a multi-genre series. That said, romance is extremely important factor to the story. It allows you to glimpse the hearts and minds of the characters. You know what they’re thinking, what they’re feeling, you know their anguish, their pain and their joy. Through it all, you care for them like members of your own family. When another character hurts them, the sucker punch lands squarely in your gut too… then their enemies become yours and you cheer when the bad guy gets what’s coming to him or her. It’s a mark of a good writer when one can make you feel emotions for fictional people…

Is Outlander a series that men and women will enjoy? Definitely. Don’t let the romance thing turn you away, guys and gals. The books are packed with epic adventure, fantasy, intrigue, politics, history, good and evil, love and hate, places, times… not to mention awesome plots, characters and dialogue! There are moments when you laugh aloud and times when you get “a little verklempt” (AKA: upset). And if you’re a Star Trek fan, you may find that a number of the highland warriors remind you of Klingon warriors—they’re each fierce, honorable and loyal. In fact, one in particular has a name that sounds like “Murtok”, the Klingon general from Deep Space Nine. Jamie’s clansman,“Murtagh”, doesn’t eat gak, but he’s a badass nonetheless. Dirk/ d’k tahg, claymore/bat’leth … see what I mean? It’s a great story! Give it a shot!

If you like this episode you may also enjoy: Facts in Fiction: The Mysterious Outlander Standing Stones

Music featured in episode from Circa Paleo’s Tideland album

Women of Sci-Fi, Fantasy and Fandom

For more on the Diana Gabaldon Outlander Series make sure to visit the Starz website, Audible or Amazon.com