The TOS Project continues with the second of six Star Trek movies, which, in the words of Philip J. Fry, “average out to be pretty okay.”  Posts for the Star Trek films will be written live-blog style, with timestamps from Netflix streaming.

Before watching: As you likely know, Star Trek 2: The Wrath of Kahn is widely considered to be the best Star Trek movie. It’s so good, in fact, that they remade it in 2013. Bazinga!  But seriously, I know I’ve seen this one before, perhaps multiple times, but it’s not my go-to of the original movies. I’m not sure what it is, but it’s never really been my cup of tea. However, now knowing more of the history of the eugenics wars – from both finally watching TOS and reading more future history in novels and on Memory Alpha – my opinion may change. 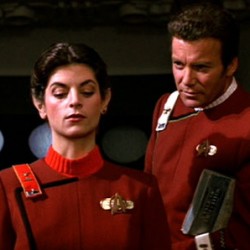 0:00 – I thought this was going to be the TOS theme at first, but it surely is not. It’s just… weird.
0:03 – Vulcan Kirstie Alley is hilarious, because I want her to be Rebecca Howe (Cheers, FYI). Am I supposed to be wondering where Kirk is? Also, these uniforms are WAY better than the last movie.
0:04 – Oh! The Kobayashi Maru! There’s all of this stuff in Trek lore that I guess I never realized originated in the TOS films. I’m not sure where I thought it came from, especially after watching TOS, but it’s like pieces of my cultural knowledge are pinging.
0:05 – Said cultural knowledge makes these explosions and “deaths” meaningless, as I already know this is a simulation.
0:07 – Why is the former crew of the flagship training new crews? You’d think they’d have better things to do.
0:08 – Kirk asks Spock, “Aren’t you dead?” Really? Really?!  *headdesk*
0:09 – What are those pants Bones is wearing? Also, why does he ALWAYS have a disco collar?
0:11 – So Kirk is depressed about getting old? Or being disenchanted with his work? Or both? That’s not the first time that Roddenberry has done that, either.
0:13 – Hey, it’s Carol Marcus! And she’s fully clothed!
0:14 – What is Project Genesis? Are they trying to artificially create life on a planet? Is that why there can’t be a microbe?
0:16 – Chekov made the connection to the Botany Bay! Good for him! He can actually remember things that happened before (unlike Spock and NOMAD).
0:18 – Woah. Khan seriously aged between “Space Seed” and now. Thought, I guess it has been 15 years.
0:20 – Exposition time!
0:21 – Wait. A planet just… exploded? With no warning? Six months after they arrived? And killed ALL life of this planet, even microbes, except for a scary scorpion-worm-thing and the super-humans, making it a possible site for Project Genesis? ‘Kay.
0:24 – So glad I am watching this when I have a serious fear of creepy-crawlies.
0:26 – Hey! A travel pod! I’m so glad those things can go faster now.
0:27 – Why are they doing training missions on the flagship? That seems like a bad idea.
0:29 – Wait. Why is Spock calling Kirstie Alley “MISTER Saavik?” I suppose that is military/naval tradition. It just feels odd. I mean, you really don’t need a gender identifier there at all. She has a rank, which he uses 5 seconds later.
0:30 – Also, sitting in the captain’s chair is not “piloting.”
0:33 – So no one questions that Chekov is acting strangely? At least they’re trying to confirm his story.
0:37 – That is one sparkly IDIC curtain in Spock’s quarters. And a weird mirror that I can’t stop looking at.
0:39 – Foreshadowing! Both to the end of this movie, and perhaps to Kirk’s speech to Picard in Generations.
0:43 – Yay! Genesis backstory! ….And it seems like a really bad idea. Especially because it can also be a genocidal weapon.
0:47 – Did Khan just attribute “revenge is a dish best served cold” to the Klingons? ‘Cause I’m pretty sure it’s Sicilian.
0:51 – I love Shatner’s surprised face.
0:53 – Also, his glasses. 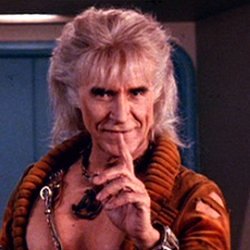 0:54 – You really would think that one of the first things Khan would do is change the ship’s password. It’s very convenient that he doesn’t.
0:57 – Well, that was a weird and unnecessary death scene.
1:01 – When did this turn into a horror movie? Yikes.
1:02 – Khan killed everyone else on Regula I, but left Chekov and Terrell in a shipping container? What happened to their brain slugs?
1:05 – I’m assuming Kirk knows that Khan is listening in on their conversation?
1:05 – Well, that’s a new transporter effect.
1:07 – And THERE are the brain slugs. I guess Kirk didn’t know, and now Khan’s actions make more sense.
1:08 – Wow, I’m impressed with Terrell. I just don’t understand why his death would make the bug thing in Chekov’s brain decide to leave.
1:10 – Oh, the “Khaaaan!” scream comes way earlier than I thought.
1:13 – Heart to heart time! Including the not-surprising reveal that Kirk is David’s father. Blerg. Unnecessary love stories have always bothered me.
1:15 – What’s with that 3 second scene on the Reliant? Odd.
1:15 – Okay, the Genesis cave is pretty impressive. But aren’t they underground? Where is the light coming from for all that plant-life?
1:16 – Why can’t Saavik let it go? Enough about the Kobayashi Maru already. I get it.
1:17 – Wait. Kirk DID know Khan was listening, and planned all of that with Spock? Sneaky.  But how?  When did they come up with this plan? What tipped them off?
1:17 – Since when can they have a conversation during transport?
1:19 – This sequence is actually kind of exciting. Such a welcome change from the first movie.
1:23 – I don’t understand why there’s a lightning storm inside the nebula. Glowing proto-stars? Sure. Lightning? Not really. Though I guess that’s the excuse for none of the sensors to be working.
1:27 – Are they actually going to use 3 dimensions in a space battle? AWESOME! It always irks me when spaceships happen across one another and they’re both in the same plane and have the same orientation, or when battles occur essentially in 2D. I’m am ridiculously happy that they did this to sneak up on the Reliant.
1:31 – So, Khan activates the Genesis device, but it’s not on a planet. So is it going to convert the matter that makes up the Reliant? Anything within a certain radius? (In that case, what is the radius, and how would the research team have kept the process confined to a single planet?)
1:34 – And why does it cause an explosion? If it were to be fired at a planet, you wouldn’t want the planet to explode. I must have missed something about that, too. And the the nebula instantly disappears, apparently collapsing around the explosion to form the planet? Okay, a nebula would have way more matter than needed for just one planet, which would be a rogue planet. But it seems that a sun/star, or maybe entire solar system, was also created? This is a little sciencey-wiencey. 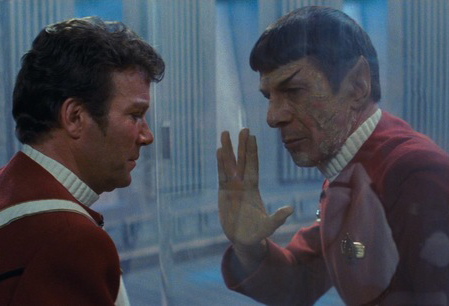 1:37 – Poor Spock. Logically sacrificing himself to repair the dilithium reactor. Are Spock’s reference to the Kobayashi Maru here, along Kirk’s constant repetition of “I don’t believe in no-win situations” earlier, meant to imply that Spock’s death will not be permanent?
1:38 – All kidding aside, this scene is pretty heartbreaking.
1:40 – Is Saavik crying?!?! Okay, the internet tells me she’s supposed to be half-Romulan, but that’s no mentioned, and she’s played everything very Vulcan thus far. Apparently, Alley made this choice specifically so it would be jarring for the audience. I get that, but I feel like maybe it should have been addressed in the dialogue, because it could just seem like an inconsistency. A[n apparent] Vulcan can’t just cry with no explanation.
1:43 – So David DOES know about Kirk. Interesting. Awww, and they bond.
1:44 – Oh, it’s nice they didn’t just forget about the crew of the Reliant, stranded on that planet.
1:47 – A modified opening statement is said by dead Spock at the end of the movie? Weird.

After watching:  You know, watching this post-Into Darkness (and drawing comparisons in my head throughout my viewing today) brought to mind one of my frustrations with the new Trek, and a lot of sci-fi films and tv in general: age appropriateness. And I don’t mean in relationships. I mean that in Star Trek, we’re supposed to be following the command crew of the flagship; the people at the tops of their fields. They are going to have completed probably several degrees and have many years of experience. So their age is appropriate for the place they are in their career. That’s not so much the case when they re-cast the entire crew as fresh-out-of-the-Academy, in their twenties. Thankfully, I don’t feel that this was every really a problem when Trek was on TV – if someone was young, they were inexperienced, and that was part of the story. But in the new movies, we’re just supposed to believe that these kids are actually the best choice to lead Starfleet. And it’s not just a Star Trek problem. Sci-Fi casts seem to be getting younger and younger, but they’re still all supposed to be super intelligent scientists with years of experience, making discoveries, curing diseases, leading research teams… Really? At 22?

But I did enjoy this a lot more than I remembered. Though, I personally would like a little more lightness and comic relief mixed in with the suspense and danger (I think this is why I like Q so much). Bones had some good sarcastic zingers, but that was about it. I have a tendency to check out when stories get all “intensity intensifies” with no break. Also, one of the problems with live-blogging a movie is that things don’t always make sense right away, and then I feel dumb when it finally clicks. But I’m not going to delete that stuff, because it’s a real reaction. The other problem is that I tend to look stuff up during the film, since I’m sitting at my computer, and then I fall down the Memory Alpha rabbit hole and have to go back several times to get what I missed. And then, I worry that I still missed things.