The TOS Project continues with the first six Star Trek movies, which, in the words of Philip J. Fry, “average out to be pretty okay.”  Posts for the Star Trek films will be written live-blog style, with timestamps from Netflix streaming (which, sadly, don’t get any more granular than minutes).

Before watching: At some point, probably close to 20 years ago, I decided that I loved Star Trek (TNG) so much that I should watch all of the movies. At that time, there were only 6 Star Trek movies, and my family owned them all. I know I started this quest. I don’t not recall whether or not I finished it. I’m pretty sure that I, at least, attempted to watch Star Trek: The Motion Picture, but it is entirely possible that I got bored, distracted, or even fell asleep. Let’s see how I fare on a somewhat-lazy snow day with two snuggly kitties by my side…

0:00 – The screen’s just black. Is something wrong with my Netflix?
0:01 – A full minute of blackness and music. Sure, makes sense.
0:01 – WAIT. A. MINUTE. That is the TNG theme and the DS9 font. What the what!?
0:04 – Klingons! Woah, that bald Klingon is freaking me out. His ridges are like a zipper all the way around his head. Weird. At least they finally HAVE ridges.
0:05 – The Klingons sunk my battleship!
0:07 – What is with that woman officer’s hairstyle?
0:08 – Those are some Classic Who level special effects.
0:09 – Speaking of hairstyle, does Spock have a bob? And is he wearing lipstick? Seems that his proclivity for blue eye shadow is over, though.
0:11 – If Spock knew he didn’t achieve Kolinahr, why would he even begin the ceremony? That seems both illogical and out of character.
0:12 – Kirk’s uniform is awesome. Also, Shatner looks good – less greasy and spray-tanned than in the series. 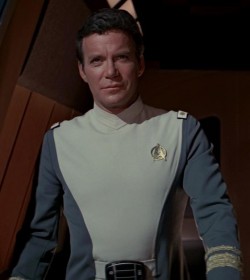 0:14 – Poor Scotty, on the other hand, does not fare as well with this new tailoring.
0:16 – Roddenberry really had a thing about Starfleet captains seeing their ships for the first time, didn’t he?
0:19 – The length of this sequence seems unnecessary.
0:21 – Are “travel pods” ever used again? They’re kinda neat.
0:22 – Okay, yeah. Kirk is the only one who looks good in this uniform. Maybe it’s the color-blocking. It’s very slimming.  It actually reminds me of Tina Fey’s Golden Globes dress.
0:24 – Captain/Commender Decker is kind of an entitled jerk, huh?
0:26 – DID PEOPLE JUST DIE IN THE TRANSPORTER?!?! Transporter malfunctions are supposed to cause mirror universes, weird aging, body swapping, and phase shifts. Not death! WTF!
0:29 – I can’t help but wonder if this cloud has something to do with the Nexus. I’m sure it doesn’t, but that’s where my brain goes.  Because TNG.
0:30 – How is an energy cloud casting a shadow? What light source is it interrupting? If anything, wouldn’t it be giving off light?  Also, where’d that person in a spacesuit come from? Is it part of the energy cloud?
0:32 – A Deltan officer? Cool. I’ve only encountered Deltans in novels.  And there’s just a throwaway line about celibacy?  Okay, fine, even if that’s kind of important with Deltans around.
0:33 – Did Bones go insane? Dude looks cray.
0:35 – So, it’s still the same Enterprise, but it’s been rebuilt? But it’s the same. Because it’s not NCC-1701-A yet. Am I going to get any backstory on this?
0:40 – I’m confused. They went to warp in the solar system (presumably, not the Sol system) and immediately fell into a wormhole they didn’t detect? So there’s a wormhole either inside or very near this system? Also, why would the wormhole make them suffer spaghettification (real thing!) and time dialation? That happens near a black hole, not a wormhole.
0:41 – Did they get out of the wormhole by firing a torpedo? How does THAT work?
0:44 – An engine imbalance can create a wormhole?! Seems like this would have been useful information for Voyager to have.  Or anyone, for that matter, when they were working on slipstream technology.
0:49 – Uhura gasps and jumps from her chair when she sees Spock. You can’t tell me she’s not into him.
0:50 – Decker gets bumped again. I’m starting to feel bad for this guy. He makes some good points, but could be less of a whiny brat about it.  So I don’t feel that bad.
0:55 – Almost an hour into the movie, and our heroes are finally encountering the villain/problem/cloud that the audience saw in the first 5 minutes. It’s like nothing has actually happened.
1:03 – Holy cats, this is dull. 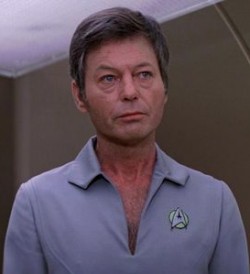 1:06 – Why does McCoy’s uniform have that collar? It looks like he’s wearing a leisure suit.
1:09 – Is the second half of this as boring as the first half?
1:12 – How is there a plasma probe, that’s shooting lightning, and it’s not frying the computer or hurting any of the organic life on the bridge?
1:15 – Nevermind.
1:16 – No matter what they say, there is absolutely no urgency to this film at all. “We have to break free in 15 seconds!” Who cares, if those “15 seconds” last 20 minutes?
1:19 – I’m sorry, “photic sonar”? Soooo, it measures the sound that light makes? Whaaat?
1:22 – I thought we might actually go a whole Star Trek movie without a skimpy costume. Oh well.
1:22 – V’Ger! THAT’S what this movie is! I kept waiting for this in the show, but it’s in the movie! An actual lightbulb just appeared over my head.
1:24 – Why is Perez wearing a weird, old-timey football uniform? Seriously, what is with that costume?
1:28 – Why do they always assume there’s a humanoid crew with emotions and recreation? These people should really have enough experience by now to remember than androids and intelligent machines exist. Especially considering that they’re being referred to as “carbon units.”
1:31 – Doctor Chapel? DOCTOR? YASSSSSS.
1:33 – “The V’Ger orifice”? There was no better way to phrase that?
1:35 – Wait. Is the dude in the spacesuit always Spock? Is it some kind of projection thing? Or did I just miss something entirely?
1:37 – Why not try to mind-meld with an intelligent, living machine with enough power to create an energy field more than 80 AU in diameter? Nothing could possibly go wrong… *eyeroll*
1:39 – V’Ger’s is barren and cold despite all of its logic. [sarcasm] I wonder if that’s a metaphor for Spock and the Kolinahr? [/sarcasm] 1:40 – Oh, Spock. You sentimental fool…
1:42 – Hold up.  I need to science for a minute. V’Ger’s energy field is more than 82 AU in diameter. An AU, or astronomical unit, is the average distance from the sun to the Earth. Neptune’s average distance from the sun is approximately 30 AU. And the outer edge of the Kuiper Belt is about 50 AU from the sun. So, if the Enterprise is at the center of this energy cloud, as implied, and are that close to earth, all of the planets and the Kuiper Belt would already be enveloped by said energy cloud. (science!)
1:45 – Why would Spock use the “V’Ger is a child” metaphor rather than bring up NOMAD, which was, presumably, no more than 7 years prior for these characters?  “Hey Jim, we JUST DID THIS.”
1:49 – I would say that Kirk is clever, except that this is, like, the 500th time he’s used the same tactic to outsmart a machine. 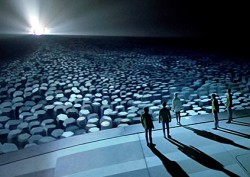 1:53 – I am confused about what, exactly, Kirk et all are walking on, and where they are. Did I miss the part when the Enterprise got stuck in magnified cork? (Or maybe toothbrush bristles?)  Why did the machine home planet need to surround V’Ger with so much extra stuff, anyway?  (The concept of a machine planet, however, is pretty frakking cool.)
1:55 – OMG! The Voyager 6! Of course, there was no Voyager 6. Voyagers 1 and 2 were launched in 1977 and are still out there and have the ability to transmit data, and Voyager 2 is expected to enter interstellar space in the next few years. Space is awesome.  (Seriously, the Voyager mission is crazy awesome – look it up.)
1:56 – It fell into “what they used to call ‘a black hole’”? What do you call it now, Decker? If it fell into a black hole, it would never have escaped.
2:00 – Ilia knows they’re trying to shut it down, right? Why isn’t she trying to stop them? Rather than just insisting that V’Ger must join with “the Creator”?
2:00 – Ten minutes? Ten minutes until what, exactly? Impact? Energy overload? I have no idea.
2:02 – V’Ger won’t be complete until it has a human quality, allowing it to “leap beyond logic.” Emotions are good, I get it. Could this be any more heavy-handed?
2:04 – Decker, Ilia, and V’Ger all get to be together! Awww. (barf)  Wait, is this “the Singularity” that everyone keeps talking about?  ;)
2:05 – Huge energy explosion, and the Enterprise and Earth (and the rest of the Sol system, for that matter), come out unscathed.
2:07 – “Thataway.” Really? Thataway? I wonder if Starflett would have anything to say about that. Kirk doesn’t even bother to see if there’s anything else going on, huh? He just wants to go on a joyride in his ship.

After watching: Seriously, that was boring. Like, “counting the minutes til the closing credits” boring. Unoriginal plot, terrible pacing, no urgency, no suspense, bad science. And I’m super disappointed that we didn’t see the Klingons again.  You know what?  I envy my sleeping cats.