Donate
Blog RSS
iTunes
Stitcher
Zune
Podcast RSS
The TOS Project continues with the first six Star Trek movies, which, in the words of Philip J. Fry, “average out to be pretty okay.”  Posts for the Star Trek films will be written live-blog style, with timestamps from Netflix streaming.

Before watching:  I think I once started watching Star Trek 3: The Search for Spock, but I don’t remember finishing it.  Since they know where Spock’s body is already, they don’t really have to search. Unless it’s a “search” for the procedure that will bring him back to life. But… I mean, it’s not just a 2-hour long medical drama, right?

0:00 – Previously in the Star Trek movie franchise…
0:06 – Awww, Jim misses his bestie. But Chekov at the science station? Mmkay.
0:07 – Someone really needs to explain this weird mechanic uniform that Scotty has been wearing in these movies. Bright white coveralls and a giant collar that looks like it was made from an old tire? Poor guy. (I do love him, though, and his “miracle worker” bit.)
0:07 – Did that guy just ask if he gets a party? Not cool, dude.
0:09 – What is that Klingon lady wearing on her head?
0:12 – The Excelsior, huh? I like it.
0:13 – Why would someone break into Spock’s quarters? Also, these security uniforms are ridiculous.
0:14 – So, it was Bones. Let me guess: Everyone else is going to assume McCoy has gone insane, but really Spock, knowing his body couldn’t take it, somehow transferred his consciousness to Bones (perhaps a mind meld post-neck pinch) before entering the radiation chamber.
0:19 – Klingon Christopher Lloyd is weirding me out. I also am not sure what exactly he’s after or why his crew keeps calling him “my lord.”
0:20 – So Saavik (who looks oddly different) and David are on the Grissom. (Like Astronaut Gus Grissom?)  That makes more sense. Kirk’s log made it seem like he just left them there on the planet.
0:21 – Wait, did they not know that Spock’s missile tube landed on the planet? I imagine they must have calculated the trajectory before launching it.
0:22 – Also, another life form.
0:23 – For real. What are these costumes?  Is that a track suit? 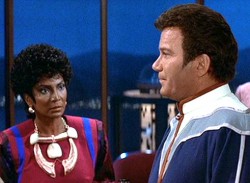 0:24 – Sarek seems pretty angry/passionate for a Vulcan.
0:25 – Spock didn’t ask Kirk to return his katra! He “asked” McCoy! That’s why he’s acting cray! How long before they figure it out?
0:28 – Called it!
0:30 – Am I supposed to believe that the microbes on the tube combined with Spock’s body and evolved into those slug things? Gross. Additionally, why is Spock’s burial robe folded?
0:32 – Kirk’s career stands for rationality? If you say so, dude.
0:33 – Tribbles! Nice!
0:35 – This alien is interesting, but this scene feel straight outta Star Wars. I’m sure it’s not just his syntax.
0:36 – How are the scientists not concerned by the cacti covered in snow?
0:37 – “Federation funny farm?” “Fruity as a nutcake?” ::headdesk::
0:38 – Sulu’s leather cape is amazing. And this is ridiculous.
0:39 – Commander Uhura? Nice. This lieutenant is an idiot, and Uhura is totally B.A. Too bad she doesn’t get to go on the adventure.
0:41 – They’ve already gone against orders, broken McCoy out of the hospital, assaulted other officers, and witnessed a kidnapping, and hijacked a starship (so much for those repairs); but Kirk can’t ask them to go any further. Okay.
0:44 – Why does the Excelsior have to pursue? Couldn’t they just activate a tractor beam from the station? Though, I do love that they have to back out of their parking space.
0:45 – Oh! Here’s the tractor beam! Why not use it earlier? That’s a convenient decision.
0:46 – Transwarp failed! Who ever would have guessed? The old-timey dying engine noses were a nice touch.
0:47 – Oh, they also sabotaged a starship. All of these guys deserve to end up in jail. But I doubt anyone will ever mention it again.
0:48 – A crying Vulcan child? So, that’s Spock? (So where did those slug things come from?  Any where did he get clothes that fit?) David says his cells could have been regenerated by the Genesis wave, but 1) the previous movie says that any existing matter would be destroyed and 2) not only was the wave long gone by the time Spock’s tube was launched from the Enterprise and landed on this planet but 3) it didn’t affect any of the matter on the ship, and 4) if the wave we saw was still propagating outward from the Genesis planet and could regenerate things, the would galaxy would be in a lot of trouble.
0:50 – An energy surge? Yay! It must be the Klingons! Woah, I did not expect them to just blow up the Grissom. Yikes. And that Klingon disruptor is intense, too.
0:51 – Okay, it is one thing for McCoy to be acting like Spock, but actually using his voice? I understand wanting the situation to be disconcerting, but carrying Spock’s katra is not going to alter McCoy’s vocal chords.
0:52 – Protomatter? I guess that explains it?  Protomatter is “unpredictable” and all.
0:53 – The slug things are now these terrifying worm things! Protomatter is the worst!
0:54 – So, I’m guessing this kid is “blank” because he doesn’t have a katra. I would buy that except for the fact that the mind meld occurred before Spock went into that radiation chamber, where he repaired the warp drive and had this touching moment with Kirk. How could he have done that without his katra? (Or did he just copy it to McCoy, and not transfer it? I’m guessing, since it’s also referred to as his “soul”, it’s not a copy.)
0:55 – No, they did not just reference Pon Farr! This could get weird. 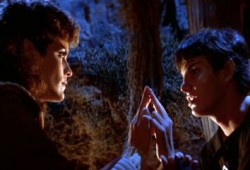 After watching: For some reason, I had the impression that this movie was dumb.  Like, bad dumb.  I mean, part of it might be kinda silly dumb, and it’s certainly ridiculous at times, but I had a lot more fun watching this than I expected to. Though, I could have done without the creepy Pon Farr stuff.  I need a shower.