The TOS Project continues with the sixth of six Star Trek movies, which, in the words of Philip J. Fry, “average out to be pretty okay.”  Posts for the Star Trek films will be written live-blog style, with timestamps from Netflix streaming.

Before watching: So, since Final Frontier (Star Trek 6) was the one about God, I really don’t have any recollection about the plot of this movie. Does it have something to do with Kirk’s retirement? Or Klingons? All I know for sure is that he quotes Peter Pan at the end. (Spoilers!) Also, this was the film that Syfy showed during their Leonard Nimoy memorial marathon. Plus, it’s an even number. So it better be good.

0:00 – “For Gene Roddenberry.” Is this movie gonna make me cry?
0:03 – Where do I get one of those tea cups?
0:04 – Holy cats! It’s the Nexus! Wait… wrong movie.
0:04 – Turn into the wave? Like when you’re car is skidding on ice?
0:05 – Wait a minute! When did Janice Rand become a communications officer? Good for her!  (Apparently, in ST4, and I totally missed it. Thanks, Memory Alpha!)
0:06 – Oh! There is something about retirement… oooor not.
0:08 – So, the peace/cooperation/whatever between Starfleet and the Klingon Empire that we see mostly in TNG is all because the Klingons can’t afford it anymore? Amazing.
0:09 – “Alien trash of the galaxy”? Racist, much, Starfleet Command?
0:11 – That was a really weird meeting.
0:13 – Uhura should get more reaction shots. Just in general.
0:14 – Hey, there’s a framed picture of the son Kirk didn’t know he had, and knew for like 4 days. What a great excuse to hate all Klingons!
0:16 – What, exactly, is Spock and Valeris’s relationship? It’s weirding me out. And it’s Spock’s final voyage on the Enterprise? I’m already getting sad.
0:19 – Kirk really seems to hate being a diplomat. This is why we need Picard.
0:19 – Did Chekov just reference a Katharine Hepburn movie? Love it.
0:21 – I kind of love opulent Klingon ceremonial garb.
0:21 – Look! More totally racist officers! C’mon, Star Trek!
0:22 – Why are they drinking toilet water? Is that supposed to be Romulan Ale? Fail.
0:22 – Shakespeare in Klingon is the best.

0:24 – You tell ’em, Azetbur! (#NotAllHumans)
0:26 – The entire crew is being terrible! What the?
0:29 – I’m as confused as Kirk right now. But I appreciate that anti-grav purple blood globules.  (And I remember them.  So I must have seen this before.)
0:31 – Is Bones ever in sickbay? Like… ever?
0:34 – Bones went over there because “they might need a doctor.” As soon as he starts doctoring, he claims not to know Klingon anatomy. C’mon, dude.
0:37 – Spock gets to solve a murder mysetery! Exciting! (I mean, I’m guessing that the Klingons set this all up and did it to themselves to get what they wanted and frame Kirk.)
0:39 – Hey! The crew is being loyal to Kirk and ignoring Starfleet orders. Never would have seen that coming.
0:42 – That’s Michael Dorn! But it’s not Worf. But it IS Worf? …Oh, this Worf is father of Mogh, and Worf’s grandfather! Thanks, Memory Alpha! (I feel like I need to make that a meme.)
0:43 – So the Chancellor died because Bones was old and hungover?
0:44 – Why is Chang’s eyepatch bolted onto his face? That cannot be sanitary.
0:49 – Worf is like the John Adams of the Klingon Empire.
0:51 – We found a clue! Let’s write it down in our handy, dandy notebooks.

*I got distracted looking for Blues Clues gifs and had to rewind. Worth it.
0:53 – Oh man, I love it when alien animals are dogs in costumes. In general, I’m just a fan of animals in costumes.
0:54 – Snow does not behave this way. Trust me. This is like that fake snow that is used in those mini Department56 Christmas towns.
0:56 – This scene feels like a mashup of Mos Eisley spaceport and Les Miserables.
0:58 – Hehe. “Waporize.”
0:59 – I love how they’re all showing up in this room several minutes after the phaser alarm went off. It’s like when I call my parents, and my mother answers, then my dad picks up the phone three minutes into our conversation and says, “Hello?”
1:00 – Kirk’s deep into planning his escape? He’s deep into something, alright.
1:01 – And THAT is how you make a d*ck joke.
1:03 – “I’m afraid of changing my worldview! Pity me!” #humantears
1:04 – Does Martia want to escape with him or get with him? Geez.
1:05 – Why are Sulu’s captain’s quarters smaller than a Manhattan studio apartment? And why can a subordinate just open his door? Why not just use communicators? That was weird.
1:08 – Dax?! He doesn’t look like a Trill (even considering that Odan and Jadzia Dax look totally different). But he’s definitely not human… Memory Alpha does not list his race, so I’m gonna guess that this one is a coincidence. Thanks, Memory Alpha! 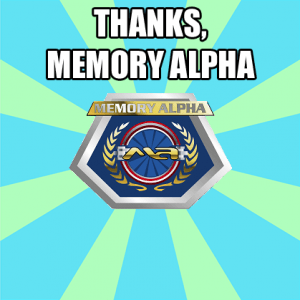 1:10 – She’s a shapeshifter!? Awesome! (Though, you’d think the Klingons would have known that and take precautions, but that wouldn’t be convenient, I guess.)
1:14 – Isn’t Uhura supposed to know Klingon? Or at least be familiar enough with it that she wouldn’t be completely butchering it?
1:15 – They can’t use the translator to send messages, for reasons, but why not use it on the ones they receive? That seems very unnecessary.
1:17 – Okay, I thought I had heard the best line of the movie before, but I was wrong. (Also, this again?)

1:21 – That’s a lot of information to be announced over shipwide comms. Are they setting a trap, mayhaps?
1:22 – Yup.
1:24 – Valeris is very un-Vulcan, in both actions and ideology. (Is she Romulan? I want her to be Romulan.)
1:25 – Forced mind meld – always a good choice. (eyeroll) A human, a Klingon, and a Romulan came up with this together?
1:27 – Khitomer! Ooo, backstory for TNG! It’s all coming together! Or… maybe not.
1:29 – Awww, Kirk and Spock and growing and learning!
1:30 – Everyone is human? Was the crew not taken to task for this attitude at the beginning of the movie? It’s like “I don’t see color.”
1:37 – Oh, bad physics in space battles…
1:39 – Scotty gets the assassin! Yeah! He did something!
1:41 – Look at all these alien races I want to know more about! I’m starting to get annoyed that Starfleet is so human-centric, too! (Actually, not starting. I’ve been talking about that for years.)
1:42 – Decommissioned?!
1:43 – And there it is. The only part of this movie I remembered.

After watching: So, I was wrong about the Klingons sabotaging themselves, but I wasn’t too far off. I enjoyed this. It certainly wasn’t dull. And although it had it’s funny moments, it certainly was not campy in the same way that some of the other movies were. It was also not an action movie – it was political if anything, with one space battle. And I think that’s a fitting way for the TOS cast to (supposedly, at the time) finish up their story.