“People assume that time is a strict progression of cause to effect, but actually from a non-linear,
non-subjective viewpoint – it’s more like a big ball of wibbly wobbly… time-y wimey… stuff.”
— The Doctor, “Blink” 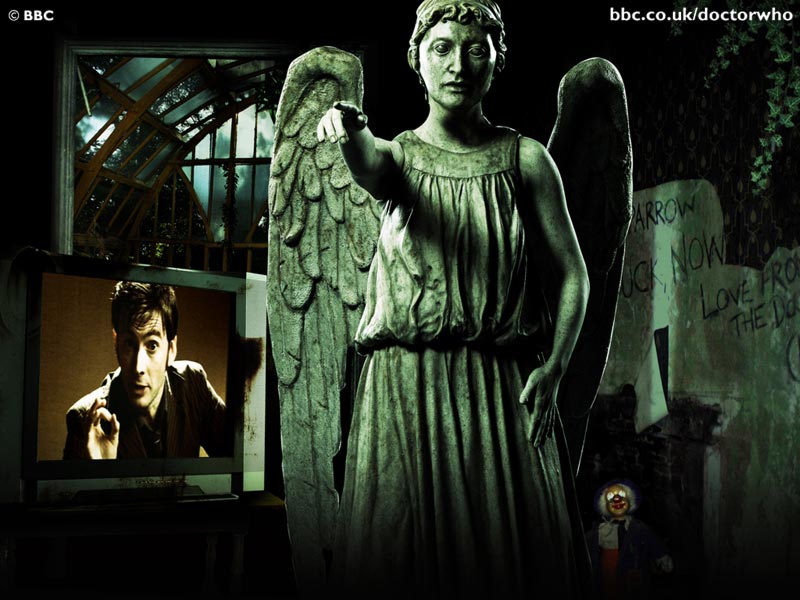 This month’s episode of Anomaly Supplemental is all about Doctor Who. It was decided the co-hosts to conduct an experiment involving a newcomer to the series and one of the most popular episodes in the show’s history. For those who are unfamiliar with the premise of Blink, much less Doctor Who, here is a brief synopsis.

In 2007, Sally Sparrow enters an abandoned house and comes across a cryptic message written on the wall by someone called “the Doctor.” The message says “Beware of the weeping angels” and mentions Sally by name. It is also dated 1969. Sally suddenly finds herself in the center of unsettling mysteries. Why should Sally be concerned about weeping angels? How are all these decades-old messages finding her? And more importantly, who is the Doctor?

In our Dr Who review Sue and I discussed our viewpoints on the episode, comparing notes between a longtime fan and fresh eyes while trying not to spoil too much about the series. We also discussed Sue’s list of Doctor Who n00b knowledge (posted here), play listener comments, and there are a couple of Easter eggs at the end of the show.

Thank you to everyone who sent email and audio for this episode. Keep the comments and feedback coming! You can contact Anomaly Supplemental by emailing moregirlygeekz (at) gmail.com, or calling the Google voicemail line at 248-419-GEEK (4335). We also love any mentions made via blog, Twitter, Facebook, StumbleUpon, Digg, or any other social media. And, of course, you can also email the Anomaly Podcast at girlygeekz (at) gmail.com. Don’t forget that you can have your own Anomaly and Anomaly Supplemental loot from the online Anomaly Geek Emporium! (Admit it, those Andorian pigeon shirts have been calling to you for a long time now…)

We hope you enjoyed our Dr Who Review. Thank you for listening. And remember, when watching Who… “Don’t turn your back, don’t look away, and don’t blink.“ Good luck.

Theme song for Anomaly Supplemental, “I’ll Still Be a Geek” by Marian Call, is used with the artist’s permission. Purchase of Marian Call’s songs and albums can be made online at www.mariancall.com or on iTunes. Follow her on Twitter (@mariancall) or you can like her on Facebook.