Your Moment of Who: 2012 Doctor Who Christmas Special 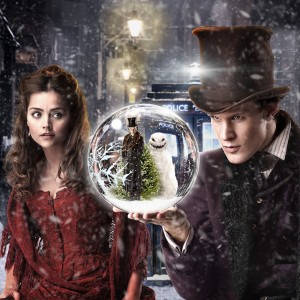 We waited for months, and it finally aired!  “The Snowmen!”  Then, you waited another month-and-a-half, and we released our thoughts on the episode.  Sorry about that little delay.  But, this conversation was recorded just a few days after the Christmas special aired.  Sarah, Kasey, and I share our impressions on the episode, the Doctor’s new look, the new TARDIS interior, the new opening sequence, the guest characters, and – of course – the new companion.

The quiz that rears it’s distracting head several times during out discussion is BBC America’s “Which Companion Are You?”  I’ve taken it again.  It still says I’m Rose.  I don’t trust it.  Another quiz that may be interesting, also from BBC America, is “Could you Survive as the Doctor’s Companion?”  Apparently, I would not.  Each is only 10 questions, so they won’t eat up too much of your time.

Remember – Series 7 Part 2 premieres on March 30, and will include an episode written by Neil Gaiman!  Some come on back in early-to-mid April for the next Moment of Who.  And, just in case you haven’t seen it yet, check out this teaser for the upcoming episodes: