“The Sixties” are No Excuse | Hermeneutics, Social Issues, and Star Trek

Over the last year, while working on The TOS Project, one of the comments I got most frequently was essentially, “Give it a break – it was the ’60s.” And now that Women at Warp is up and running, I’m hearing it even more. I’ve been thinking about this defense a lot, and talking about it with whoever will listen. And you know what? This doesn’t hold water with me.

Herme-what-now? Hermeneutics, in general, is the study of meaning and interpretation. The term is often used when discussing religious texts – “biblical hermeneutics” may sound more familiar – but there’s also “literary hermeneutics” and “aesthetic hermeneutics.”

As Zachary Fruhling, a philosopher and professor, explained to me, “Hermeneutics is like a Venn diagram, with the meaning of a text (or work of art or a television episode) being the intersection of the author’s original intentions (from his or her historical context) and the reader’s/viewer’s subjective interpretation based on the contemporary context. The author’s original intentions don’t preclude the possibility of finding new meaning. But it’s important to consider the author’s intentions to ensure that new interpretations are plausible interpretations that are well-grounded in the source material and not way out in left field.” 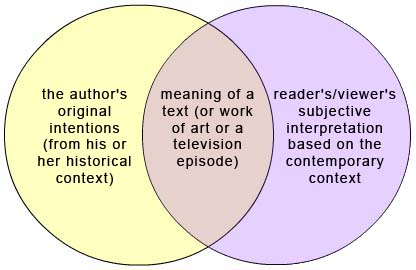 Science fiction, in my opinion, has a heavier burden that other media when it comes to this kind of interpretation. Especially sci-fi that attempts to depict an idealized world in the future. And then we consume that media 10-50 years later and find those ideals dated, lacking, or even problematic. It’s easy to understand the historical and social context of, say, To Kill a Mockingbird, which was published in 1960 and set only about 25 years prior. It’s not as easy to understand social trappings of the 1950s and ’60s in a story set in the 24th Century and beyond.

I tend to think there’s also extra pressure on Star Trek because it has a reputation for being progressive. For the time it was made it, it often was. But not always. And it’s worth noting that, in Letters to Star Trek (compiled by Susan Sackett), you can find several instances of women fans writing in and objecting to the portrayal of women of TOS. In the ’60s. (Some examples can be found here.) So, saying “it was the 60s” obscures and dismisses that history.

Let’s look at a non-Trek example: The Left Hand of Darkness by Ursula K. LeGuin was published in 1969 and is the “most famous examination of sexless androgyny in science fiction.” (Wikipedia) The book won several awards, including the Hugo and Nebula, and is often found on “best sci-fi literature” lists. However, today, many people see the work as problematic and transphobic. So, who’s right? Is it groundbreaking? Or problematic? Well, both, depending on who is interpreting the work, when, and the experiences they bring to at interpretation. Does that mean you shouldn’t read it? Not necessarily. If you do, it’s important to understand the book’s historical context. But you don’t ignore its problems when you talk about it today.

Yes, Star Trek has been around for a long time. It’s a pop culture phenomenon. And that means that it’s going to continue to be around for a long time. And people are going to continue to watch TOS (and TNG, DS9, Voyager, Enterprise, and even The Animated Series) for the first time. Never again will anyone watch any of these shows in the same decade that they originally aired. Never again will anyone have the same historical or social context as the show’s writers.

Zachary, quoted above, also wrote, “It may be helpful to think of the meaning of a text or show as something more like an ongoing and active two-way conversion; the author speaks to you through the work of art, and you speak back by reading your own meaning into the art. And this is an ongoing process, both as an individual in the course of your own life and over time as new generations continually find new interpretations and shades of meaning.”

So, this idea applies not just on a societal level, but on an individual level, as well:

Twenty years from now, when TNG is nearly 50 years old, will those of us who grew up with Captain Picard say that “It was the ’80s” to excuse the problematic elements of those episodes? (Are they already?) While the era that a piece of media was made is important and can shed new light on an idea, anyone coming to it, especially those coming to it for the first time, will interpret it differently and have different opinions about it based on their circumstances and experiences, because media does not exist in a vacuum.  And the time period that something was made in does not automatically establish a protective bubble that shields it from criticism and discussion through any lens.

To sum this all up, I’ll share what may be my favorite comment on this topic, which came from a seminarian, someone who has studied biblical hermeneutics: “The idea is to go beyond the surface of the printed page and dig deeper into what the meaning of (again, in this case) a TOS episode was and how we might interpret it today. Times, they are a-changing and how we look at the themes of well, all the manifestations of Star Trek change too. What an episode was saying 50, 30, even 10 years ago may not be how we interpret it today.“