My name is Lynn. This month, I’m participating in NaNoWriMo for the fifth year in a row, and once again, it’s turning into a fantasy novel, and I am an Anomaly.

To continue my journey into this list of 50 Fantasy Books that everyone should read, I thought I’d consider some of the books I read years ago instead of a few new ones.

When I was younger, I didn’t read a lot of fantasy. My reading choices included a lot of Nancy Drew, a little bit of the Brontës, and as much age-appropriate historical fiction I could get my hands on. I still consider Wuthering Heights one of my favorite books, but looking at this list of fantasy books, I’m surprised at how many books I read when I was young that are considered fantasy. Some of these classics include The Time Machine by H.G. Wells and Alice’s Adventures in Wonderland by Lewis Carroll. Our benefit of hindsight allows us to see these as predecessors of modern fantasy and science fiction, but in their day, I’m sure they were just passed off as imaginative fiction, meant to teach lessons of and to humanity.

I remember being completely confused by The Time Machine when I first read it. Even now, I’m baffled by time travel. It’s confusing, and it makes my eyes go all squiggly. But when Wells wrote it, it was less about time travel and more about learning about our present and future selves, which is really the point of science fiction. The greatest strength of this book is determining whether humanity is more like the Eloi or the Morlocks. Maybe Wells saw humanity as both, always in a constant conflict for the right to live in the world on their own terms. Whatever allegory Wells was trying to imply, this is another of those stories which recounts future as past rather than traveling through time. Like Battlestar Galactica taught us, “All of this has happened before, and it will happen again.” 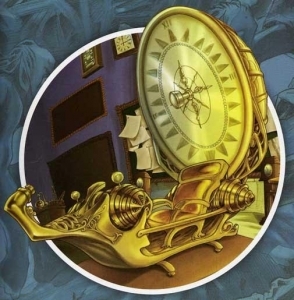 Oh, I’ll just make one of these in my drawing room.

Before I read Alice’s Adventures in Wonderland, I’d hoped that it was going to be a happy, cheerful jaunt through an imaginary land filled with happy, fantastic creatures. It was, after all, a book written for children. How surprised I was to discover that children in Victorian England were apparently much smarter and much more creepy than children in the early 1990s were. Of course, I liked the book very much, but it’s still surprising to me how strange it can seem. The amount of allegory and math in this book still astounds me. I think this is the reason that it is so often  told and re-told. I read this the first time as a kid, and I liked the poems and songs in it. I was a big fan of the insanity of the Mad Hatter and the Cheshire Cat. When I read it again as an adult, I was surprised to find so much mathematics. I even talked with my math teacher friends in order to understand some of the deeper meanings. I think this book continues to fascinate people not because of the lessons and the math but because it makes the crazy dreams that we all have be a little bit more acceptable. We all have some crazy dreams, at night and daydreams, but Alice gets the chance to live in them a little bit longer than we are able to. 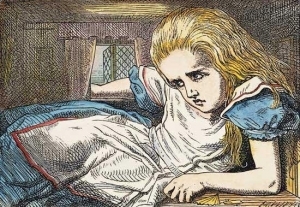 I always found the term “New Classic” to be a bit strange and oxymoronic, but both American Gods by Neil Gaiman and Harry Potter and the Chamber of Secrets by J.K. Rowling absolutely fall into this category.

I don’t really know how I first discovered Neil Gaiman, but I’m glad I did. I have enjoyed everything I’ve read of his, but American Gods is one of the best, and it’s a great introduction to his writing and to modern fantasy in general. This is a book that I would recommend to people who don’t really read fantasy because you don’t even realize it’s fantasy until you’re so far into the story that you can’t stop reading. The characters are amazingly real, and the situations, based both in fantasy and reality, are completely believable. Since reading this book, I see mythology in modern life continuously played out. It’s amazing. Go read it if you haven’t. 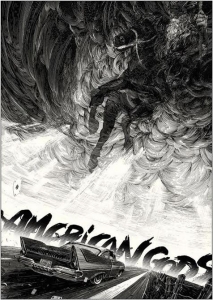 I’m not quite sure why the writers of this book list chose The Chamber of Secrets over any of the other books. Deathly Hallows was the book that pulled the entire story together, and it didn’t disappoint the readers (well, for the most part), but perhaps this one is the book that truly got things started. In The Sorcerer’s Stone, we are merely introduced to Harry, his story, and the wizarding world, but it’s not really until Chamber that we see the true impact of the evil that Harry must inevitably fight. In the first book, people got hurt, but in the second, we see our first hints of the death that comes when one is in an epic battle for good and evil. I think Rowling actually did do a great job of pulling everything together in one book for the first time. This one taught me to pay attention to each detail because all details are important. However, I can’t say anything about any Harry Potter book, especially the first ones, without saying this: THESE PROBLEMS COULD HAVE BEEN PREVENTED WITH MORE OPEN LINES OF COMMUNICATION! But then we wouldn’t have one of the greatest stories of modern times. 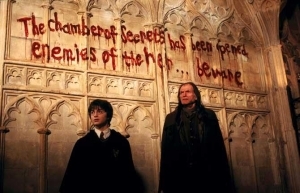 Seriously, who writes in blood?

Though it’s not Harry Potter and not fantasy either, I do also recommend reading The Casual Vacancy (but don’t watch the HBO miniseries). Rowling is a fantastic and sympathetic storyteller, even when she’s not writing about The Boy Who Lived.

Some of the greatest fantasies are those that can happen in our own world. It’s the ones that teach us that when we look down a dark walkway, instead of seeing the unknown, we grab our swords and wands and charge forward to adventure. 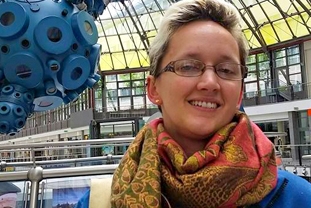 LynnContributor / Word Nerd
Lynn favors the creatures of the universe, including her small viper-pilot-wannabe dachshund, “Nugget”, and her man, “Laserchuck”, who has fallen through time without a Tardis.
More Info
By Lynn Forster|2016-12-22T14:24:29-06:00November 19th, 2015|Anomalous Musings, Book Reviews, Books, Fantasy|0 Comments

About the Author: Lynn Forster