Anomaly Waffles On about Shaun of The Dead 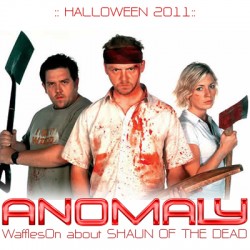 Our Shaun of the Dead review from 2011 was the winner in the poll we posted to our Facebook Group recently. It beat out Buffy: Hush, Buffy: Once More with Feeling and the Elder Scrolls game series review I told you about in the Mass Effect episode I posted recently.

In this classic Halloween edition of Anomaly, Angela and I were joined by our good friend Simon Meddings, from our “brother podcast” Waffle On. “Meds”, as he’s known to his friends, is a horror film aficionado so we allowed him to lead the conversation about this British Rom-Com-Horror film. This was a fun conversation that includes a skit at the beginning of the episode. Simon wrote the skit, I mixed it (as well as the episode) and Angela and Meds and I star in the dramatic episode intro…which probably isn’t kid friendly.

Zombies are no laughing matter, except when they are beaten off with flying LP’s and cricket bats. Shaun decides to turn his life around during a zombie apocalypse. It turns out the zombie attack is a great opportunity to demonstrate to everyone just how capable he really is. All he has to do is survive… and get his ex back.

The 2004 British comedy was written by Edgar Wright and Simon Pegg. Pegg also stars in the film with Nick Frost.

Pegg plays Shaun, a man who, up until this point, has lead a boring life. Just when he thinks things can’t get any worse, a zombie apocalypse takes place and it falls on him to save his family and friends. His weapon of choice? A cricket bat! Perfect.

Critics and moviegoers loved Shaun of the Dead. Watch it again this Halloween season!

If you haven’t seen Shaun of the Dead, Night of the Living Dead or Dawn of the Dead, we suggest you watch these films before you listen to this podcast installment, for spoilers abound in this episode.

If you like this episode, you may also enjoy these posts:  Star Trek: Beyond, Stranger Things,  Independence Day: Breakthrough Blockbuster or Mediocre Movie?

Shaun of the Dead Movie Trailer

AngelaFounding Co-Host / Cheer-tator
This is not a democracy, it’s cheerocracy and Angela is the cheer-tator… and she will deal with the cheer-consequences.
More Info
By JRhodes|2016-12-22T14:24:18-06:00October 9th, 2016|Anomaly, Fantasy, Geek, Movie Reviews, Sci Fi, Show Notes|0 Comments