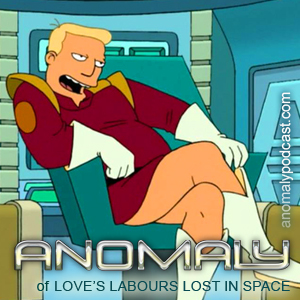 In this edition of Anomaly, Jen and Angela discuss Love’s Labours Lost in Space from Futurama‘s first season. The hosts talk about their favorite moments, quotes and uncomfortable situations where, in true Zapp fashion, men who thought they were “God’s gift to women” turned everything they said into sexual innuendos. Good times…

It’s a casual, meandering chat that is lighthearted and fun…until their children crash the party at the very end, causing a containment breach.

Anomaly is more than a podcast, it’s a conversation between friends. And, as a listener of said conversation, we consider you one of us! Please join the discussion by commenting here, following us on Twitter, leaving us feedback on our Facebook page or sending us an email through our contact page.

Mentioned in the episode is a song called “Psyché Rock” by Pierre Henry, which inspired the Futurama theme. Also Mentioned was Love’s Labours Lost by William Shakespeare  and V Dusk Falling, a location based, mobile app vampire game.