Interstellar Film Review: A Movie About an Anomaly

It’s always cool when Sci-Fi technobabble uses the word Anomaly to describe anything. It gives credence to what we do. This week I had the opportunity to see the new Sci-Fi movie Interstellar starring Matthew McConaughey. Anne Hathaway. and Jessica Chastain. It even had two guys from Good Will Hunting, and this dude you may recognize from Miss Congeniality. I’m going to attempt a spoiler-free review at the top of this and then rock into the spoilers at the end.

In a not-quite-so distant future on earth, we have a huge problem, and in order to survive as a species we need to find a Class M planet to relocate to.  We find out early in the film that 10 years earlier 12 astronauts traveled through a wormhole (or Anomaly) to a distant galaxy to investigate 12 possible planets. Another mission is currently in the works to visit the planets that got the thumbs up. And that is all of the plot you can get from me at this point.

What I really liked about this movie was that it felt like an old Star Trek, Earth’s possible future, real science theory type of sci-fi film. Like Star Trek it also has a sense of optimism in the future of mankind. The cinematography in the space travel scenes was beautiful and felt like a documentary of the space program. We did not see the film in IMAX, but I can imagine those scenes would have been amazing on that scale. Similarly the future spacecraft depicted seemed like a reasonable extension of the current NASA technology. I’ve read that the film employed a physicist to make sure that the science was represented as accurately as possible. The score, by Hans Zimmer, helped the transitions between the sweeping space drama and the very grounded story being experienced on Earth. And I really like the beginning and the end documentary style interviews.

Now for some elements that did not dazzle. The running time is almost 3 hours long. I’m not necessarily complaining about the length as a singular thing, (I’ve watched all of LOTR Extended Edition in one sitting.) But honestly Interstellar has about 2 hours of content in that 3 hours of movie. And I was painfully aware of moments and scenes that needed trimming. There was a bit of indulgence in some of the themes through use of these unnecessarily extended moments that almost made them uncomfortable, and certainly did not move the story forward.

Interstellar also had to by nature of its story include what appear to be supernatural or super-advanced being/technology elements. Not easy to achieve: see the horrible Mission to Mars. When you make a certain type of hard Sci-Fi (or soft depending on your definition) movie like Interstellar which is so rooted in reality, these fantastical elements must have a logical explanation. At least within the “logic” set up by the world you’ve created. E.g. we establish that transporter technology is possible, so problems caused or solved by that technology make sense in the logic of the world. Interstellar makes a huge deal about the realities of this hard world, so when the seemingly supernatural things start happening the connection seems weak. Yes it does eventually get a logical explanation, but it is a plot point held together by dental floss that dictates the entire basis of the movie. Not a deal breaker, but I can see why fans of Sci-Fi might find it a bit objectionable. 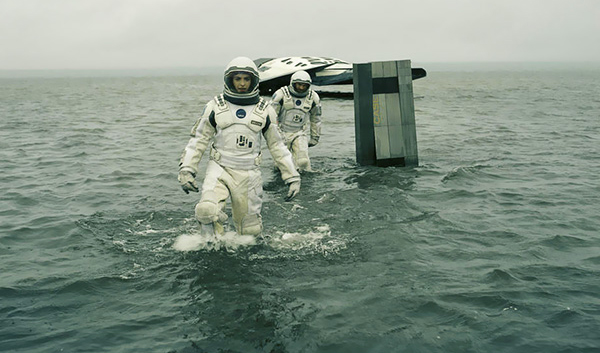 Overall, I would give the movie a solid A- I’m sure Jen has set up a rating system, but I’m not sure what it is. :) I recommend seeing this movie at a large or IMAX screen especially if you enjoy the space travel experience.

SPOILER TIME. YOU HAVE BEEN WARNED!

I read several normal reviews of this movie that don’t address everything I would like to have seen addressed because spoilers. So if you have seen the movie this next section is for you. Really it is a series of questions.

1. Why didn’t they have someone else on the list to pilot the shuttle before Matthew stumbled onto the secret government property?

2. After years of Murphy being a scientist in the NASA program, wouldn’t she put two-and-two together and get the sacrifice her father made? Disappointed and sad, yes. Angry, no. It just doesn’t make sense.

3. And speaking of being a scientist, in all that time, nothing drew her back to her old room. She figured out something was up when she was 10, didn’t pique her interest again…?

4. I get it. 5th dimension. black hole. singularity. blah. blah. But as long as we are bending time and stuff, isn’t there a more direct way to communicate with this person that is in charge of the future of everything? And on that note, if they can create a flipping wormhole you would think they could include the coordinates of a good planet. Also, why another galaxy? The Milky Way is really, really big! There has to be a planet closer to home. And why no aliens?

5. Back to the hard Sci-Fi idea. I believe in this. As you know, I love Star Trek. It is a hard Sci-Fi universe. There is plenty of drama and interpersonal relationships without sacrificing (maybe stretching, see Worst of Trek) but not sacrificing that idea. In Interstellar, the basic message is…love. That love and following your heart is the key to survival. It’s a beautiful message, but seriously I don’t think it fits in the way that they tried to fit it. It seemed shoe-horned.

6. I really enjoyed the voices and tone of personalities of the “computers” that accompanied Matthew and Anne on their voyage. My favorite future tech idea for the film. See I ended on a good note!

I hope you liked this Interstellar film review. Looking for more movie posts? Check these out: Avengers: Age of Ultron, Guardians of the Galaxy and Mad Max: Fury Road.