“I don’t understand Doctor Who. Never seen it. All I hear is people asking, ‘Who’s your Doctor?’
Well, you know who my doctor is? Beverly Crusher.“
-Me, World Con 2011 (before watching any Doctor Who)

Beverly Cheryl Howard Crusher has been my favorite character in , , , all of media since 1987. Almost 30 years. In preparation for today, #BevCrusherDay, I sat down to blog with the intention of creating a list of the best Crusher episodes. But it’s hard to create a top ten list – or even a top five list – when Beverly Crusher is the true central character of only six and a half episodes. I’m sure you’re thinking what I was thinking: “That can’t be right…” Oh, but it is. Ready? Here’s the list:

So, let’s face it. Beverly Crusher is a character that gets short-changed quite often. Not only as the featured character in TNG episodes, but in merchandise as well. For example, there are eight Pez dispensers in the in the recent TNG Collectors set. You’d think that would be perfect – seven “regular” cast members and the Enterprise, right? Well, think again. Picard, Riker, Data, Worf, Geordi, Troi, and the ship are always there. Crusher is there often, but in a Walmart-exclusive set, she was replaced with Locutus (or “Borg Picard” as the descriptions call him). And don’t even get me started about Crusher’s exclusion from the Funko Pop! TNG figures (also 8 figures), but the inclusion of Locutus and a generic Klingon.

Anyway, it seemed silly to create a top-anything list of Bev-centric episodes, especially since I’ve watched all of those over and over and over again. Yes, even Sub Rosa. So instead, I’ve decided to share my TOP TEN Beverly Crusher moments/scenes/b-stories in other episodes. And this was actually pretty difficult to pare down.  Here goes… 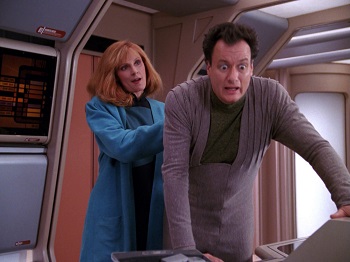 When discussing Beverly Crusher, people tend to refer to her as “compassionate” and “nurturing.”  While they’re not wrong, I think a lot of people forget that she can be pretty darn snarky, and can produce some Liz-Lemon-quality eyerolls.  Never are those skills on display quite like they are in her scene with Q in engineering.  Gates McFadden and John deLancie were friends long before TNG, and together they are fantastic – it’s a shame that they didn’t get to play off of each other more during the series. 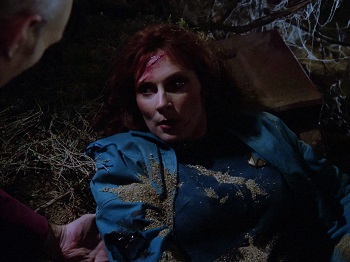 This is the episode that I always point to when people claim that Dr. Crusher is “too reliant on her technology.” She’s losing blood, going into shock, barely able to stay conscious… and can still direct Picard to find a root and make paste that serves as a clotting agent. Plus, we get a rare information about her childhood and the experiences that inspired her to study medicine. 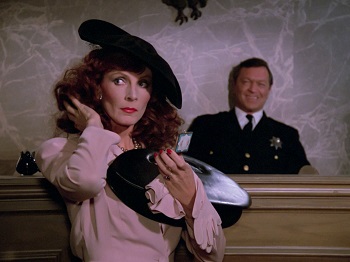 This episode is right up my alley – holodeck malfunctions, film-noir-esque costuming, super awkward interactions (Who cleans lipstick off her boss’s face during a meeting? B-Crush, that’s who.), and a super goofy crew.  And Gates does some really great work with the physical comedy she has in the precinct’s waiting room. 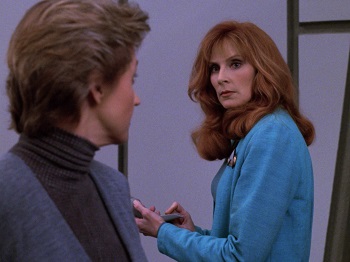 Crusher’s speech (read: smackdown) to Dr. Toby Russell at the end of this episode is the perfect example of her dedication and care for her patients and crew mates.  There’s really nothing I can add to it, so you should probably go watch that scene. 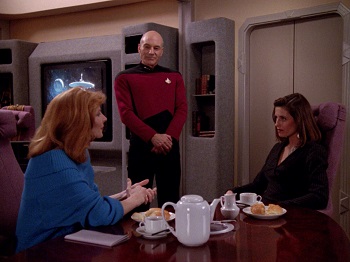 A Vash episode?  Yep.  Because this scene is pure joy.  Crusher arrives for her breakfast with Picard, to find Vash already there. Unlike the weird jealous Bev that we get in “We’ll Always Have Paris,” she’s confident enough in how their relationship has grown to milk the situation and make Picard as uncomfortable as possible – taking his seat, chatting with Vash…  And then?  Then she drinks from his cup.  It’s just delightful. 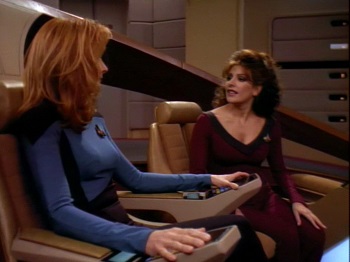 The teaser of this episode has stuck with me since it originally aired – I might still have parts of it memorized (I do).  These two women, already at the top of their fields and serving on the Federation flagship, are talking about taking on additional challenges and responsibilities simply because they want to push themselves.  And there is not even a sense that they are competing with one another (far to frequent a setup in media), but simply encouragement among friends and colleagues.  It’s only a couple minutes long, but it’s really important to me. 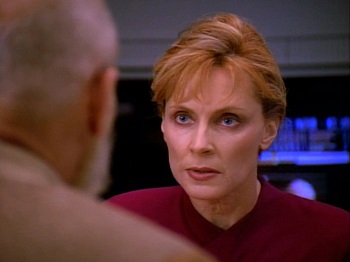 This episode is not just in the list because of the Ready Room kiss.  Although, I do love that.  Obviously.  But from the moment she spun around in her chair on the bridge, I adored Captain Beverly Picard.  She still acts with the same conviction and compassion we’ve come to expect from the character, but there’s something else to this Captain Picard.  So often in TNG, Picard and Crusher face off over the Prime Directive, compassion versus practicality, and when she faces off with her ex-husband after he questions her orders, their roles are reversed. 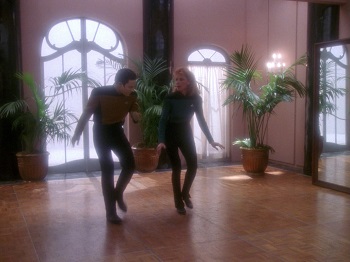 I am a tap dancer and this makes my heart happy.  ‘Nuff said. 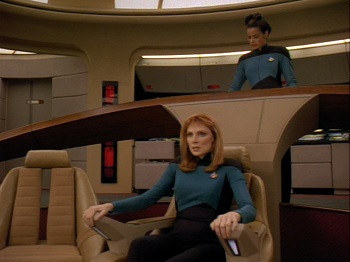 Well, specifically Part 2: Bev in command!  So much is great about her stint in the middle seat – including a callback to “Suspicions” with the use of the metaphasic shielding to take the ship into a star – but my favorite part is her interaction with Ensign Tate, who’s been on the Enterprise for six weeks and is not at all confident in her abilities at the start of this episode.  With some subtle guidance and encouragement from Crusher, Tate eventually stands up the the lieutenant that’s been a bit of a jerk to her all episode, and eventually figures out a way to defeat the Borg. 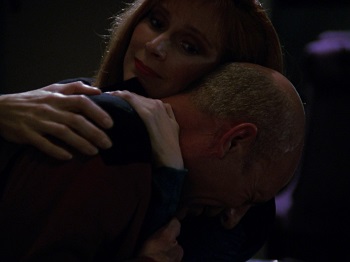 Although Crusher does not agree with Picard’s decision to mind meld with Sarek, she’s there to support him.  And this scene, where Picard breaks down due to Sarek’s long-suppressed emotions, is just so lovely. Beverly is there to comfort him, and she’s the one person on that ship that he can trust to see him in such a state.  Whatever else these two are to each other (and I think you know I want them to be more), they are incredibly close friends who love and respect each other and will support one another through anything.