Anomaly | Worst of Trek | TNG Genesis (No… Just No)

TNG Genesis or “The One where Barclay Spins a Sider Web” 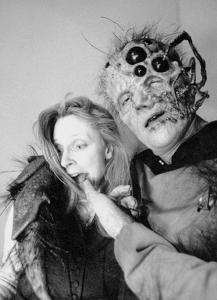 The best thing about Genesis is that it is probably the official low point of TNG. Whether you think it was an interesting storytelling experiment or agree with us that it was just plain embarrassing, you’ll love this discussion from Jen and Angela about the best of the Worst of Trek! Instead of a normal show notes description, we are just going to share the random notes we took while viewing. Enjoy! (Also to quote Kasey, BARCLAY SPIDER!) What do you think? Is it the worst of the Worst of Trek? Email us or call 432-363-4742 and let us know.

If you like this episode, you might wanna check out these too: Worst of Trek “The Game”, “Best of Trek: Lower Decks”, More Worst  and Best of Trek Episodes… 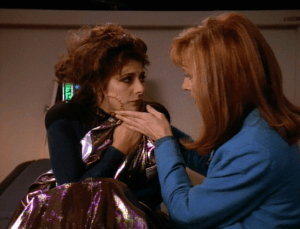 Beginning is cute: Star Trek ER
7th Season
Why is captain piloting the shuttle?
Spot is pregnant
Troi and Worf — ew —gross gross gross gross, bite gross
Troi’s hair is horrible
Worf just being a dick
Poor Michael dorn
So a spider is manic and odd?
I’m so embarrassed for everyone…
Bio sac, ward getting spotty
AHHHHH!!!
Enterprise is adrift
Fancy piloting by Picard… fancy
I think that the first time I saw this episode, was enough, you know. I have not seen it since then.
I bet it was hard to keep a straight face around Spiner… he must have had a joke time field day.
Troi is first… I can’t I can’t….aaahhhhh
Love how during disasters someone is always randomly off the ship
Did Riker just give us the bird?
Explanation why everyone is different. 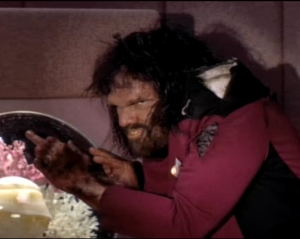 Angela was right! He’s flipping us off!

Barclay thinks he has the “Terrelian Death Syndrome”, ha!
Allysa is preggers!
Picard is SO excited about the increase in explosive yield and the improved targeting system…that’s… not improved.
Barclay Babysits Spot, because Spot loves him and hates everyone else, apparently
Data’s quarters are decorated with books and a violin (nice touch). Do we see this in any other episodes?
Data doesn’t know the father of Spot’s kittens
Worf throws a fit beause he can’t fiture out what’s wrong with the guidance system.
Worf and Deanna have a spat over octopus tentacles, turkey legs and huge glasses of water.
Worf is pigging out and Deanna is getting hot and thirsty
Riker is becoming dumb
Barlay is on overdrive—it’s like he drank then Red Bulls and a pot of coffee…basically what my brother is like if he drinks ONE cup of coffee.
Worf Bites Troi…
Dr. Selar is mentioned in this episode, though we haven’t seen her in a long time (several seasons) so she’s apparently still on the ship
Worf has venom sacks…spits in Crusher’s face
Barclay acting weird during the meeting with Ogawa and Riker—hilarious
Ogawa saunters off like a chimp after this meeting

AngelaFounding Co-Host / Cheer-tator
This is not a democracy, it’s cheerocracy and Angela is the cheer-tator… and she will deal with the cheer-consequences.
More Info
By Archangela23|2016-12-22T14:24:33-06:00September 13th, 2015|Anomaly, Show Notes, Star Trek Episodes, Worst of Trek|4 Comments