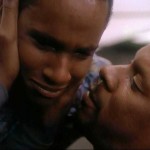 In this special  Father’s Day episode, Jen and Angela discuss the Star Trek Deep Space 9 episode: The Visitor. It’s the third episode of Season four. The hosts banter at the start of this installment, before talking about how much their fathers mean to them and how their dads influenced their lives. They then discuss The Visitor and returned to bantering at the conclusion of the episode. It wouldn’t be an Anomaly without the banter. Listen to the very end for an outtake and podcast promos.

This was the first time Angela had ever watched a DS9 episode in its entirety. Because it’s a stand alone story, it’s a great one to start with because new viewers can clearly see just how excellent the acting and writing is in this series. In fact, The Visitor was nominated for a Hugo Award for Best Dramatic Presentation in 1996, and consistently ranks in official fan polls as one of the best of all Deep Space 9 episodes.

The primary reason Jen selected this episode as special Father’s Day topic, is because Jake and  Benjamin Sisko are  a great example of a good Father/Son relationship. The story wonderfully illustrates the bond between father and child as well as the sacrifices they often make for one another. It’s a heart-wrenching story of love that may also speak to those whose fathers are no longer with them.  One of The Visitor‘s underlying messages is that a lost parent would not wish their child to mourn for them after their death, their entire lives, but instead that that they focus on healing and go on to live their own to their fullest. 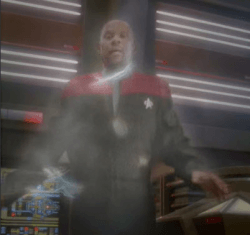 The hosts forgot to mention in their discussion, including the Hugo Award nomination, that Melanie (also referred to as “the stalker” by Jen and Angela), or the young writer who comes to visit the elderly Jake Sisko, is Rachel Robinson; the daughter of  Andrew Robinson who plays Elim Garark. The actress also auditioned for the role of Ezri Dax. Tony Todd, who plays the older  Jake Siskos, did an excellent job. He has a great love for theatre and has appeared in on and off Broadway. His movie credits include Platoon, Night of the Living Dead, The Candyman, The Crow, The Rock, Wishmaster, The Final Destination series, and Minotaur to name a few. As far as television goes, he’s been in shows, including The X-Files, Stargate SG-1, Angel, Charmed, and Andromeda…but the list is long. He was also the voice of The Fallen in Transformers: Revenge of the Fallen for those of you who are Transformer fans.

Spoiler Alert! If you haven’t seen this particular Star Trek episode, we hope that you’ll pause our review, watch The Visitor and then return to this installment of Anomaly to finish it. You’ve been warned. :)

We hope you enjoyed this Deep Space Nine The Visitor Review. You can also call the Anomaly Podcast voice mail line at 432-363-4742, use the widget on our site or send an audio file to girlygeekz at gmail dot com. Commenting is also open in the Anomaly Facebook Group or at the bottom of this post. Please follow us on Twitter, Pinterest, GoodReads and other fine social media outlets (found at the top of our site).  Thanks for subscribing!

Star Trek: The Next Generation: Rascals

Star Trek: The Next Generation: The Measure of a Man

Take Him With You