Anomaly | Take a Trip Back to The Future

If you like this episode, you may also enjoy these posts: Growing Up Geeky,  Hiding Your Geek,  The Princess Bride, Austin Comic Con, Renfest Reports, and Where’s My Flying Car.

Oh How Time Flies! Back to the Future is 30! 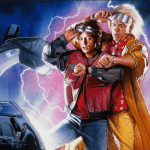 In this special vidcast episode, Angela and I toast the film series: Back to the Future. October 21st, 2015 is just around the corner! Spoiler Alert: That’s the date in Back to the Future II, when Marty shows up to save his future family and basically the entire world from that giant jackass, Biff. Seems like an awesome reason to celebrate, right?

During our discussion we talk about some of the things the movie got wrong. For instance, Marty’s version of 2015 doesn’t quite line up with our present. Men don’t wear double ties, we seem to be lacking flying cars and the Cubs still haven’t won the world series. But there are quite a few things they got right, like:

I remember seeing these movies in the theater as a kid. In the summer of 1985, when the first film hit the screen, I was a sci-fi loving eleven-year-old girl. My favorite band was Huey Lewis and the News. Michael J. Fox was a fox, but I was twelve or thirteen when I finally recognized that fact. Better late than never, I guess.

I STILL love these movies and apparently, I’m no the only one. What’s your favorite scene?! Post below and let us know!

I hope you enjoy our tribute to Back to the Future. Now go re-watch the series and celebrate with us!

HD Version of our Back to the Future Celebration Episode

Back to the Future Movie Trailer

Back to the Future II Movie Trailer

Back to the Future III Movie Trailer