The Future of Space Travel: A Virgin Galactic Interview 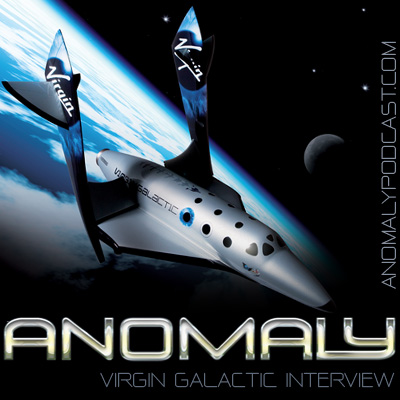 In this edition of Anomaly, Angela and I interviewed Will Pomerantz, the Vice President of Special Projects for Virgin Galactic. This episode was inspired by a discussion we had during a review of  a famous Star Wars spoof  that neither Angela or I are particularly fond of. Because of our disinterest in that movie our commentary soon turned into a chat about the last shuttle mission and the downsizing of NASA (If you wish to listen to that episode, you can find it along many other episodes in our Archive). Like many children I wanted to be an astronaut when I grew up and, having watched the final launch earlier that day, I was deeply saddened by the end of the shuttle program. Angela on the other hand was upset and embarrassed that NASA would now have to “hitch rides” with the Russian space agency in order to reach space. That impromptu conversation later sparked comments from listeners who felt just as dejected as we did. We requested this interview in an attempt to inject a little optimism (for the future of space travel) into ourselves and our listeners. Below is an audio comment  from one such listener–Greg Blanchard of the Inappropriate Conversations podcast. Thank you Greg, for sending us your thoughts on the end of the shuttle program.

Virgin Galactic hopes to perform the first rocket-powered test flight of its suborbital spaceliner by the end of this year, with commercial operations after a year or two. The cost? Two hundred thousand dollars a seat on Space Ship Two.

Five hundred people are on the waiting list and according to Mr. Pomerantz, Virgin Galactic is about to surpass that number. “That’s a nice milestone for us, especially when you consider that, if you add up every astronaut NASA has ever flown, plus every cosmonaut that the Russians have ever flown, every taikonaut the Chinese have ever flown, that’s about 525,” he told reporters during a 2012 Next-Generation Suborbital Researchers Conference.

Yes. A ride into space is pricy, but it’s always been expensive.  There are other companies working on space vehicles. Competition means better technology. It also means competitive pricing and eventual affordability. Keep the faith listeners. The stars are still within our reach.

Thanks again to Will Pomerantz for agreeing to come on our show. We really appreciate his time.

Music in this episode was from MW Orbit, by Rick Moyer. You can find his music on Amazon.com, CD Baby and iTunes. Please support good art by buying an album or track… and tell Rick you heard about his work on our podcast.

AngelaFounding Co-Host / Cheer-tator
This is not a democracy, it’s cheerocracy and Angela is the cheer-tator… and she will deal with the cheer-consequences.
More Info
By JRhodes|2016-12-22T14:25:11-06:00March 10th, 2012|Anomaly, Interviews, Sci Fi, Science, Show Notes|0 Comments