On this month’s episode of Anomaly Supplemental, KC, Sarah, and I chatted about Syfy’s reality show “Face Off.” 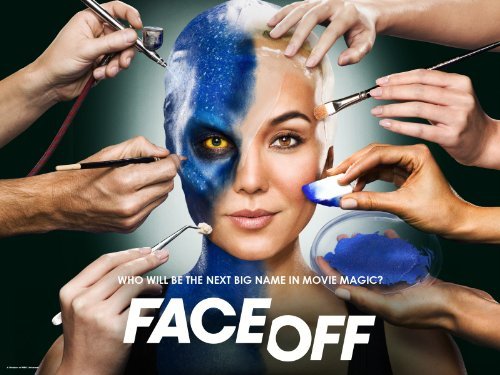 According to the Official Show Site:
Face Off is a competition/elimination series exploring the world of special-effects make-up artists and the unlimited imagination that allows them to create amazing works of living art. The contestants are tasked with elaborate feature challenges including executing full body paint make up on models and creating their own horror villain. Not only will the show incorporate effects make-up, it will include a wide range of skill sets including prosthetics, 3-D design, sculpting, eye enhancers, casting and molding. Each episode involves incredible reveals of the competitors’ finished work, and the drama of one contestant being sent home by the panel of expert and celebrity judges. It all culminates in one winner and one grand prize that will launch a career.

We discussed the show’s format, the judges’ credentials, and the challenges thus far.  We also debates the role of the host in this and other reality competition shows.  Of course, we spent most of the time talking about the make-ups that we’ve seen so far this season, and a few from the first season.  And, although we’re only 2 episodes into Season 2, we also gave our early opinions on our favorite

[and least favorite] contestants, and gave some vague predictions on how they will fair in coming episodes.

Please be aware that this episode does contain spoilers for the current season (“Return to Oz” and “Water World”).  And, if you’re new to “Face Off”, or you’d just like to see the make-up applications again, we highly encourage you to check out the make-up morphs before or during the podcast.

Next up on Anomaly Supplemental: In February, we’ll be covering Disney’s 2007 feature film “Enchanted”, starring Amy Adams, Susan Sarandon, and James Marsden.  And later this year, the Anomaly staff will gather for a Hunger Games roundtable discussion.  If you haven’t read The Hunger Games, or if you’d like to re-read it before the movie release, join us in the Anomalous Book Club on Goodreads.  We’d love to have you!  Discussion of Chapters 1-7 begins February 6!

Theme song for Anomaly Supplemental, “I’ll Still Be a Geek” by Marian Call, is used with the artist’s permission. Purchase of Marian Call’s songs and albums can be made online at www.mariancall.com or on iTunes. Follow her on Twitter (@mariancall) or you can like her on Facebook.