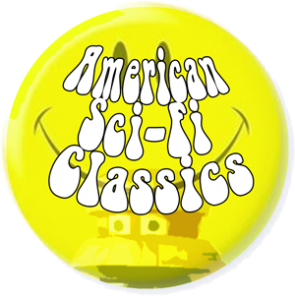 This past Sunday, I sat down at the virtual table with Joe Crowe and Gary Mitchel, the co-directors of the American Sci-Fi Classics Track at Dragon Con.  We talk about their history with Dragon Con, how they wound up track directors, guest and fan panels coming up this year, and share some stories about Dragon Cons past.  Also, Joe and Gary confirm one of my panels, discuss a right of passage for this track, and identify what is possibly the greatest sci-fi show to have ever graced the television screen.

We mention several other tracks as well, including by not limited to:  American Sci-Fi Media, Sci-Fit Lit Track, Brit Track, Trek Track, XTrack, Urban Fantasy, Podcasting, Puppetry… Well, there are over 30 fan tracks.  For more information on any or all of them, check out the Dragon Con Fan Tracks page.

Towards the end of the episode, Gary mentions one of last year’s panels, which wound up being a discussion of how sci-fi creates the future.  A recording of that panel is available from the Dr. Geek’s Lab podcast, and is available here.  We also mention Bob and Carl, the Sci-Fi Janitors.  If you are not already familiar, their YouTube channel is highly recommended.  We also briefly mention friend-of-the-podcast Kevin Bachelder and his many podcasts.  The main one can be found at Tuning into Sci-Fi TV, and just follow the rabbit trail from there.

CORRECTION:  In the episode, we talk about the Sci-Fi Drive-In Theater being up against the Buffy Horror Picture Show, which has been moved to Saturday.  Although, Sci-Fi Drive-In Theater was previous held on Saturday night (for the past 2 years), this year’s event has been moved to Friday, so these two events do no conflict, as we believed during the recording.  For more information on this screening, and a preview of Super Shark, visit the event page

For more on the American Sci-Fi Classics track, join the Facebook group or follow them on Twitter, @classictrack.  You can also check out RevolutionSF.com where both Joe and Gary write and podcast.

Finally, the jingling you occasionally hear in the background of this recording in my kitten, who wears a bell around her neck.  You’ll probably want to get used to that noise.  Theme music, “The Nerd Anthem,” is used by permission of Marian Call, who is currently on tour – so check out her site to see when she’ll be near you.  “Last Dragon Con” (a parody of Katy Perry’s “Last Friday Night”) was written and performed by Deena Roth.  The music video is below.

Have something to say?  Want to share your own DC stories?  Or anything else?  Email us at moregirlygeekz(at)gmail.com or call and leave us a voicemail at 248-419-GEEK (4335).