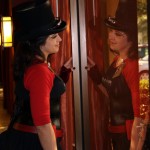 Many of Angela’s favorite Anomaly Podcast episodes are blasts from the past. In fact, our first episode from February 6, 2007 made it on her fav five list as a “bonus”. That said, I’m pretty sure it was only added to annoy me. Touché, my friend…. touché.  :)

I asked our hosts to choose a show that they were in. I thought it might help narrow things down a bit. A link to the episode and the show notes will be included in each of our lists. I’ll also include links to similar episodes—Anomaly shows you may not know even exist because they’ve been archived on our web site or buried deep in our feed. Which episodes are your favorite?

Thanks for listening!
Jen

Even in the ‘cast I say that this episode of TNG is the reason I decided to start podcasting (I realize that this is hyperbole, but I do really love Time’s Arrow). And you can hear Jen and I go on and on about it just a few weeks before Russell is born.

You might also like these Trek episodes:
Anomaly of The Measure of a Man
All Things Trek Interview

In our first joint podcast with Meds and Kell (the Waffle On lads) we take a look at this very funny and somehow also very nerdy — and very British Comedy Gold Classic movies. No Llamas were harmed in the recording of this podcast.

You might also enjoy these episodes:
Little Shop of Horrors
A Very Potter Musical

While deep in what I remember to be the worst of my chemotherapy we were able to somehow record this interesting look at the possible reasons why most people feel like they have to choose… What are Jen and Angela?…you probably know, but still fun to listen.

Anomaly reviews — and gushes — over the Empire Strikes Back of LOTR films (or is Empire the Two Towers of fantasy SciFi?) Anyway… We get into the story, music, and touch on the history and nature of “the ring”. Don’t miss Angela’s little freak out over her favorite elf: Haldir. Yes we know the elves do not show up at Helm’s Deep and we don’t care. We love you Haldir, oh yes we do…what was I saying. Show Notes
DownloadYou might also this Episode:
The Lord of the Rings

I’m a big animation nerd and it was fun to talk with Sue, Anne and Jen about our five favorite cartoons. It was interesting to see what made it to our lists, and then discussing how animated television changed between our childhood and present day cartoons. Luckily we only talked about TV animation, so there’s always the possibility to return to the subject one day with our favorite animated films, but we already have so many good ideas for Anomaly Supplemental episodes this year… you’ll just have to wait and see what shows up in the feed.
Show Notes
Download now

It’s currently MIA, but I will add it as soon as I find it. You will note the crappy mic quality, the inability to edit, and no actual show music. But here it is for your listening enjoyment. You’ve been warned..