Hey nerds! I am literally just back from getting my annual dose of 7RC (that’s medium-dark red-copper hair color, for those who don’t speak Elle Woods) before heading off to Dragon Con next week, and it time to share my schedule with you! If you will be in Atlanta over Labor Day weekend, please come find me and say “hello!”  (updated 8/27/15)

Dragon Con Newbie Walking Tours
Thursday at 2:30 PM
Main Programming (Begins in Marriott A601-602)
Want to learn the best ways to get between the hotels? Did you know there’s a food court? Come on a walking tour to find out and meet other newbies.

Dragon Con Newbies Q&A
Thursday at 5:30 PM
Main Programming (Marriott A601-602)
First Dragon Con? Are you confused or overwhelmed? Several long-time con attendees will share tips & tricks and give you a chance to ask questions.

Dragon Con Newbies – 101
Friday at 10:00 AM
Main Programming (Hyatt Regency V)
First Dragon Con? Are you confused or overwhelmed? Several long-time con attendees will share tips & tricks and give you a chance to ask questions.

Terry Pratchett: In Memoriam
Friday at 5:30 PM
Brit Track (Sheraton Macon)
A look into the legacy left behind by the brilliantly adored author of the Discworld Series & so much more, Terry Pratchett. A chat on the great works of Terry, as well as things that will be missed about the author. This panel is a celebration of his life, career, & works for his fans.

14th Annual Dragon Con Parade
Saturday at 10:00 AM
Parade Route
I will be marching in the parade with Puppetry Track, alongside Caroll Spinney’s car.  Caroll Spinney is the puppet performer behind Big Bird and Oscar the Grouch since 1969.

Once – On The Rocks?
Saturday at 1:00 PM
American Sci-Fi/Fantasy Media (Marriott M301-302)
Some say that this season of Once jumped the shark & caved into Disney pressure by introducing Frozen into the Once universe so quickly. Then, just as the sisters returned to Arendel, our villains teamed up with some additional heavyweight baddies! Was this too far over the top, even for Once?

The Legend of Xena: 20th Anniversary of the Warrior Princess
Saturday at 2:30 PM
American Sci-Fi Classics (Marriott M303-304)
The chakram. The battle cry. The amazing reign of an epic fantasy hero.
Listen Here >>

Adult Material in Genre Shows
Saturday at 10:00 PM
American Sci-Fi/Fantasy Media (Marriott M301-302)
The hot-button topics of sex, alternative lifestyles, violence, brutality, and rape are all issues on this year’s TV, from Game of Thrones to Outlander to superheroes and cops. Is this exploitation making kink acceptable, or is it demonizing it? (Mature Audiences Only)

Classic Sci­Fi Roll-­A-­Panel
Sunday at 10:00 AM
American Sci-Fi Classics (Marriott M303-304
A random roll of a 20-sided die determines this lightning round of mini-panels about classic sci-fi that we didn’t have time to cover this year.

Women at Warp
Sunday at 7:00 PM
Trek Track (Sheraton Athens)
The hosts of a new Trek podcast Women at Warp (womenatwarp.com) takes a feminist perspective on Star Trek. Currently the show is averaging over 1000 downloads per episode. Come meet the hosts and discuss the great women of the Star Trek Universe.

Creatures Beyond Space and Time
Monday at 11:30 AM
Trek Track (Sheraton Athens)
High-level discussions of how supernatural creatures & spirituality are expressed in the Star Trek Universe.

Think I’ve got enough on my plate?  Nah.  I plan to attend at least part of the Parsec Awards.  I might be manning the Puppetry Track merch booth for a couple hours.  Then there’s the Late Night Puppet Slam, and the NuWho 10th Anniversary Party, and panels that I actually want to attend as an audience member… and Oh yeah!  Steve Whitmire (the main man behind Kermit the Frog since Jim passed) is going to be there.   I’m sure I’ll sleep at some point…

Finally, I give you my cosplay lineup. 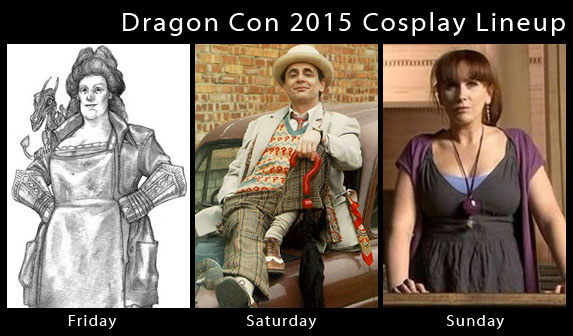 See you in Atlanta!
~s