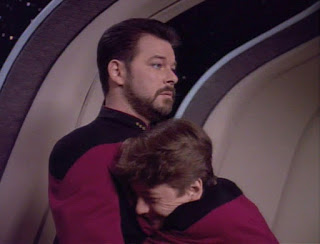 In this edition of Anomaly, Jen and Angela discuss an episode of Star Trek: The Next Generation called “Rascals”. The sixth season episode features a preteen Picard, Guinan, Keiko and Ro; not the “best of Trek”, but certainly one of the more entertaining TNG episodes. Angela and Jen also announce their plans for a live anniversary show–Anomaly is now seven years old and to celebrate they are hosting a live broadcast on Mixlr on March 1st at 2pm CST. There will be a chat room on Mixlr, where you will be able to interact with the hosts as well as other listeners. You’ll have to sign up for a free account to participate in a chat, but it’s not necessary to login to Mixlr to listen. Please “Like” the Anomaly Facebook page and join the Facebook Group for upcoming news pertaining to the live event. The details will also be announced in the podcast feed, Tweeted and posted on the Anomaly web site under the “Events” listing on the homepage.

Jen also announces a new show that she and two of her friends will be releasing soon, called “The Star Wars Stacks”. It’s a Star Wars Expanded Universe book club. Stay tuned to Anomaly, the Anomaly web site and FB group for a link to the new show.

Also included in this episode is a cameo appearance by Jen’s son, Aaron.

Thank you to Rico, Scott and Stephen for their audio comments. If you have comments to sent on this or any other episode, please consider sending an audio file to girlygeekz@gmail.com, use the widget on our homepage or call 432.363.4742 and leave a brief message.