The Road Goes Ever On: J.R.R. Tolkein and Fantasy

If you like this post you may also like these: Shaun Astin (Samwise) Panel,  Return of the King Chat and The End of An Age: The Final Middle Earth Films.

I’m Lynn. It took me a long time to realize that it’s okay to love geeky things, and I am an Anomaly.

I, like so many of you out there, went and saw The Hobbit movies when they came out (though not yet Desolation of Smaug, as of this writing). Had I the ability to travel back in time and tell my 10-year-old self that I would willingly do this, she probably wouldn’t believe me. It’s been a long road for me to sit in a theater and enjoy a movie so much. Not because of the story, but because of my own journey TO the story. I know that there has been much debate over the making of these movies and what was and was not included in them, but I’m not going to critique the movie, I simply want to share what it means to me.

When I was a kid, the only real Sci-Fi or Fantasy I was exposed to was Star Trek: The Next Generation. I lived in Germany from 1988-1991, and we were pretty limited in what was broadcast. My whole family was very excited about Star Trek’s newest iteration, and it was the only show I was allowed to stay up past bedtime to watch. In fact, it was really the only science fiction I remember watching as a kid. And fantasy was out of the question. For some reason that I don’t fully recall, but don’t want to blame on anyone, fantasy was bad—evil straight from Satan’s mouth into the eyes and ears of susceptible youth. I have read things lately that inform me that this was  prevalent fear of those times. All I remember is that I wanted to be good, and reading about dragons and monsters wasn’t good. So I never sought it out.

One long day during those years, I was spending the day with a family who my mother used to babysit for. It was a bit of a “return the favor” deal, and my sister and I spent all day with them. We watched Charlie and the Chocolate Factory, if I remember correctly. The oldest son in the family, who was a year or so older than I was, and who I never talked to (boys were weird and scary), was told to entertain me, so we went down the street to play miniature golf. When we got back that evening, he gave me a walkie talkie, sent me to another room, and asked me riddles over the magical long-distance device. I knew not one answer to the riddles he asked, but the words were elegant and beautifully formed, and I had no idea he was so clever.

Though I asked for more, he had no more riddles for me. Then he confessed the source of these magical words: The Hobbit by J.R.R. Tolkein. I think his paperback copy had a dragon on the cover, and he told me that one of the riddle tellers was a creature called a Hobbit who was like a dwarf or an elf but not. I knew that I shouldn’t read such things, so I dismissed the information and never told anyone about the magical words I heard.

Years later, as a young adult, I borrowed the DVDs of the Lord of the Rings trilogy from a friend of mine. I felt very clandestine about watching them, so I watched the movies on my laptop in the privacy of my own room at night when everyone else was asleep. I was still living with my parents and wasn’t sure about the policy on fantasy at that time. (I’m such a goody goody, and I 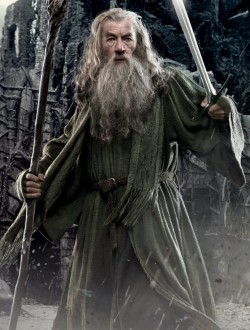 didn’t want to break the rules.) It was a modern version of staying up late to read a book by flashlight while huddled under the blankets. I found myself as enthralled by the story as I had been when I first heard those riddles from The Hobbit. I remember when the Lord of the Rings movies came out. I scoffed at how long they were, and I heard rumors that they were all in Elvish and only relevant to those who were super fans of the books. I was happy to be wrong.

I have since watched those movies several times. I bought the Extended Editions and watched all the specials. When I got the opportunity to see another Middle Earth movie in the theaters, I took the opportunity. I saw both Hobbit movies, and I intend to see the last one.

As I sat watching The Hobbit, I was enthralled the entire time. I was near to tears several times when I thought about how much I enjoyed fantasy now and how it was kept from me as a child. I don’t care that I spent money so Peter Jackson can build his castle of gold, I was happy to do so. I don’t care that battles were extended but exposition was not, it’s a movie. I don’t care that Legolas looks older now than he did in the previous movies, even with special effects. Those things don’t matter to me because I love the opportunity to hear a story, to enjoy the words spoken, and to have the chance to revel in a fantasy world. I am happy to now be at a place in my life where fantasy has relevancy and worth.

So as I sit in the theater to watch Middle Earth one last time, I will be sitting with that 10-year-old lover of words and stories, reading a book by flashlight, and she and I will have so much fun.