I’m Lynn. I used to get in trouble for staying up too late to read, and I am an Anomaly.

A few years ago, I found this list. I see a lot of lists like this. Most of them, I disregard, but this one really caught my interest. This list didn’t claim to be comprehensive, it has a wide variety of authors and interests, and most importantly, the first sentence of the introduction met my needs entirely. I have been an avid reader since I could read, but I never read a lot of Science Fiction and Fantasy (SFF) when I was younger. Now that I am older and have made a resolute decision not to read anything boring, I feel a bit intimidated by the variety of SFF literature. I get recommendations all the time for what to read, and I have followed through on some of them to find that I didn’t like the writing style of the author or was fooled by the storyline (I started reading one book, thinking it was going to be an adventure, only to find it was more of a romance. I don’t want to read romance; I want magicians to blow things up with their minds.) But I digress.

I like this list. I agree with many of the choices on it, even if I have not read all of the books. When I first found it, I made a copy of the list, and now, a year and a half later, I am finally chugging away at it. I thought I’d do some quick reviews of the books as I finish them. They won’t be heady, they won’t be long, but they will be a glimpse into my descent into the world of SFF literature, so I can finally say I’ve read Book ABC and whether or not I liked it. Hopefully, I’ll be better able to look at those shelves at the bookstore and not feel so overwhelmed by them.

I’m not reading the books in any particular order, so I’ll use the same technique to write about them. I’ll do my best not to give spoilers, though some of these are fairly well known (Harry Potter, Lord of the Rings, The Handmaid’s Tale). Thus ends my introduction and the start of my journey to being a better-read geek.

The Giver by Lois Lowry 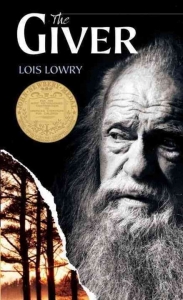 I listened to this (yes, listened. It counts.) as I was driving from Cleveland, Ohio to Central Texas with my brother-in-law to make repairs on my house. It was intense to hear these words as we made our way through Kentucky and Tennessee in the pitch dark. All I knew about this book was that it is on the Banned Book list and it was on many recommended reading lists when I was a young teenager. And I’m glad I didn’t read it then. I was a pretty sophisticated teenager, but this one would have haunted me more than it does now. It was pretty heady material, even for adults, but I like that Lowry trusted her audience enough to be able to comprehend that. Its fantastic commentary about groupthink remains relevant, and the young hero, with his insecurity about his own talents and how they fit into his future, is quite relatable. We all feel a bit insecure about our futures, especially as teenagers, and I felt my own life journey reflected in Jonas’, even through to the uncertainty of the end. There’s a lot to be said for having a life laid out for you. But then again, there’s a lot more to be said about free will.

I liked this book. I have a soft spot for post-apocalyptic societies because I always hope that our rendition of them is that we won’t make the same mistakes as we did in the past. And I always hope we can achieve the ideal we all hope for.

The Handmaid’s Tale by Margaret Atwood 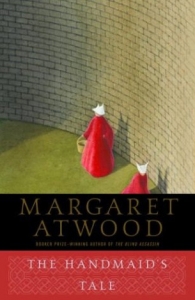 I’ve been meaning to read this book for about a decade. I have a friend who considers this book one that changed her life, and I have heard it referenced on multiple occasions lately. My initial reaction: WOW.
My second reaction: HOLY CRAP!

It has been a long time since I’ve read a book that I literally could not put down. It was subtly intense. I’ve never been one to read the last chapter first. I like to be taken away by the story, but this book tempted me to break that habit. I thought I knew the book’s world, then it would surprise me. I recognized so many aspects of Offred’s world because there are precursors of it in ours. Atwood is a skillful storyteller and a keen observer of the consequences of extremism. I felt that the world that she created was simultaneously the result of religion and feminism taken to the extreme. Offred’s comparisons of the world before and the world of the book’s now showed so many parallels I see in our society now. I don’t think I’ve read a book where the protagonist takes so little action in self-determination. And maybe that was the point. Maybe she gave into her situation because she felt so completely helpless and alone. Maybe we are all in danger of that. Finding a balance of ideologies is difficult, and I fear 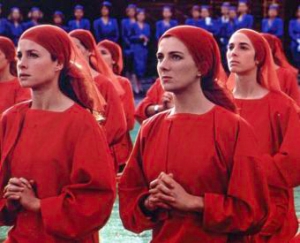 that if we don’t attain it, the kind of extremism in the Republic of Gilead isn’t unattainable. This is what makes SFF so relevant: it is a chronicle of observations of real people and real life set in an unreal situation so we can learn from its lessons.

Photo caption: In the future, if you have a viable uterus, let’s hope red is your color.
I wanted to put these two together because I am still haunted by them. They really are life-changing books, as cliché as that sounds. They forced me to consider my own beliefs and actions. As I read The Giver, I considered what memories of the past I would consider important. As I read The Handmaid’s Tale, I was tortured over where I would be categorized in a world that placed a woman in a box based on her level of fertility and outspokenness. It was scary, but it made me grateful to live in a Western culture in this century.

Next up, a book that I know that I already know the ending of and one that’s a whole lot more lighthearted: The Fellowship of the Ring by J.R.R. Tolkien and The Color of Magic by Terry Pratchett.

If you like this post about sci fi books you may also enjoy: Women of Sci-Fi, Fantasy and Fandom, The Hunger Games and The Night Circus.

LynnContributor / Book Worm Wizard
Given the chance, Lynn would accept a ride on a starship from any of the following people: Hoban Washburne, The (9th) Doctor, Galen Tyrol, and Han Solo (who did shoot first, by the way). Lynn is a leaf on the wind and an Anomaly.
By JRhodes|2016-12-22T14:24:45-06:00June 16th, 2015|Anomalous Musings, Book Reviews, Books, Sci Fi|0 Comments