GeekVengers. They’re Geeks on a Mission… 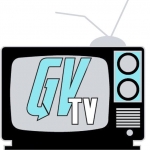 In 2012, we had the pleasure of meeting the super friendly GeekVengers team of; Alex, Stewart and Marselles, at Austin Comic Con. Lisa, a former member of their show, interviewed Kasey (see video below) about being a geek girl. We saw the guys filming at PAX South this past year, and I thought I’d return the favor by interviewing a representative from their own show.

Today we’re talking to Jen, AKA “Lil’ Bit” (the geek girl member of their awesome series) about herself, who the GeekVengers are and what they do. And we just couldn’t resist tossing a few fun, geeky questions in for good measure (thanks, Kasey!)

Can you tell our readers about Geek Vengers?

We are just a group of fun loving geeks and nerds which started off as a small group of movie watchers in San Antonio. We have our FB group that welcomes anyone with an interest in any type of fandom to join us for fun and shenanigans. Our group is very diverse and we strive to have fun above all else.

How did you get started? How long have you been producing the show? 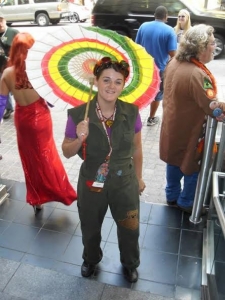 The group started with the core 3 guys, Alex Trevino, Marselles “The GeekFather” Coe and Tim Stewart back in 2012. They would go to midnight movie premieres and other events together and eventually decided they wanted to start filming some of the fun, nerdy events they were going to. I joined the FB group after meeting Alex at a Can’t Stop The Serenity event, and after being interviewed for a few GVTV segments, I was eventually invited to join the media/admin team in late 2012. Adam Garcia joined the media team about a year later, though he as well was already a member of the fandom group.

Between the two of us, Angela and I have backgrounds in graphic design, marketing and PR and it comes through at times in the way we present Anomaly. Does your team have a background in television or is their another field that influences Geek Vengers?

Yes, for sure. We all have background influences. Alex and Tim have worked or the San Antonio ABC affiliate KSAT for quite a long time. Tim as a cameraman and Alex as an editor/. Marselles has a voice acting background. Adam works with computers and has a gaming background. I have been a radio DJ for about a decade, was a touring musician for almost the same amount of time, art major and a longtime costumer.

Anomaly is a passion for us. What keeps GeekVengers flying?

We have a blast working together for one. We get along really well and constantly crack each other up. Getting the chance to cover events, interviewing celebrities, attendees, vendors etc, it really is a privilege that we never take for granted. We also try to cover things that we have a genuine enthusiasm for, and I believe that comes across in our segments. It is easy to keep going and working when you really love what you are doing.

You cover a lot of fan conventions, which one is your favorite? Why?

We’re all going to have a different answer for that one, since we all have different areas of fandoms that are our favorites. For me though, hands down Dragon Con. As the guys can attest, I talk about it nonstop all year long. I began attending in 2010 and it has become my annual vacation. From the first moment I went, I just had this feeling that I was “home”. I have a feeling of truly belonging there, that I haven’t felt anywhere else. From the sheer size of it and all the things it offers, I never get bored. When the final day hits, I already start making plans for following year. My friends would say I’m obsessed, haha.

If you could Gender Swap any character (male or female) who would it be and why?

Hmmm. I would gender swap Doctor Who. I mean, there has been a female time lord before, but I would love to see a female as the actual titular character. I think there could be some excellent story lines involving the Doctor adapting to being in not just a new body after regeneration, but a new sex. Trying to reconcile masculine feelings/memories while in the female form, etc.

Which Norah Ephron movies would be improved with a post-apocalyptic setting?

This might seem like an obvious answer, but Sleepless in Seattle. Instead of Sam and Jonah Baldwin calling into a radio show, they detail their story over ham radio because he and his son are alone and are just looking for someone, anyone to connect with. Then, Annie, along with many other people who happened to catch the transmission, start traveling across the wasteland in search of the Baldwins. Some travel to find them out of a sense of love and the need to be with more, sane people for survival and others go after them because they are bent on destroying happiness and the old way of life. Will Annie get to them in time before “Reapers” find them? Will they find a safe place to all connect and survive in this new world?

How would you feel if Andy Serkis and the WETA team did a motion capture version of Fantasia?

Well, Disney did just announce interest in a live action Fantasia, focusing on the Bald Mountain sequence. I have mixed feelings on that. I like that segment, and think it could be a great fit for live action. I am not a huge fan of the whole cartoon though, and I think if someone were to try and turn the whole film into live action/mixed motion capture/etc – it could be a boring waste of time. Andy Serkis would be a good choice, however I would rather see Doug Jones step in with some awesome costuming/practical effects.

Who do you think has a Dungeons and Dragons group on board Battlestar Galactica while everyone else is playing poker or dying?

Baltar as a DM, Athena, Dualla, Tory, Gina Inviere and Gaeta (but he whines a lot, so Baltar purposely makes bad stuff happen to his character)

Which is your favorite Geek Vengers episode?

My personal fave is Marselles interviewing Stan Lee last year at ACCC. It was a very emotional lead up to filming and just he best thing ever I could want for my friend. Selles had the whole room in tears and with chills after he was finished. Best.Day.Ever.

Which is your least favorite Geek Vengers episode?

Least favorite would be when I covered Dragon Con for the channel for the first time in 2012. I was filming on my own, and it was hard to get great shots, good sound and really show what was some great about the convention. I am still proud of the work, just wish it came out the way I saw it in my head.

Thanks for talking with us Lil’ Bit! Hope to see you all at the next convention!

Be sure to check out GeekVengers!