Putting on the Tights One More Time: A comprehensive review of Batman in Film

If you like this post you may also like: Avengers: Age of Ultron, Something About Superheroes, Agents of Shield and the Five Stages of Grief, Top Kick-Ass Villains, and this Guardians of the Galaxy Review.

The great thing about a trailer is that it can go a long way to generate interest in your film, especially when there are casting choices that are not universally seen as ground shaking.  I can imagine that was the hope that the good folks making Batman v. Superman were hoping to achieve, but sadly for them, their trailer was leaked to the public a whopping day and a half after the Star Wars Episode 7 trailer turned grown adults into puddles of quivering fan-goo.

Nevertheless, I was tempted to take a look back at the history of the Caped Crusader in film.  For purposes of this article I am sticking to live action movies, though the animated feature length works are worth note, if merely to remind us how well Mark Hamill does the voice of the Joker.  As most of these movies have been out for quite a while, I feel free to use spoilers as needed, you have been warned. 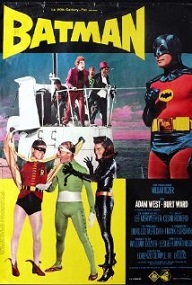 Here we see the first treatment of the Caped Crusader on the big screen, played by Adam West.  This is not the “Dark Knight” as we have come to know with a gruff voice, but rather the most outlandish “theater of the absurd” rendition of any comic book character I have ever come across.  And let me tell you all, I have come across MANY an absurd comic book movie; the 1994 Roger Corman version of the Fantastic 4 comes to mind.  There is more cheese in this film than in a Wisconsin winter, and it’s even tastier.  Impressionist Frank Gorshin plays Riddler with a manic energy, famed Latin lover Cesar Romero plays the Joker…and if you look close, you can see that he refused to shave his equally famed mustache for the role, and just had it covered with white paint.  Burgess Meredith plays the Penguin.  How much better could the cast get? Lee Meriwether as Catwoman.  Meow.  This film is eminently re-watchable. 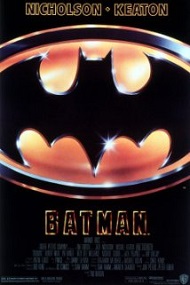 Here is the movie that made me fall in love with Batman.  The Michael Keaton Batman, directed by Tim Burton.  I first saw the TV trailer for this film on a family vacation to visit my Grandpa in Arizona.  My brother and I freaked out.  But we had no point of reference for why we were freaking out.  Neither one of us owned any comic books at this point.  We hadn’t ever seen any of the Adam West Batman to compare it to.  We just saw the Batmobile and lost our shit.  One thing I truly love about Burton as a director is his ability to mix the absurd and the dark.  This movie has both, dished out in heaping helpings by Jack Nicholson as the Joker.  His portrayal was chilling, insane, yet campy and way over-the-top.  We see Joker use his infamous smilex gas, which kills and leaves their victims with a rictus grin on their deceased faces, along with more “gag-like” killing devices, acid in a squirting flower, and a joy-buzzer that delivers a lethal shock.  Kim Basinger is mostly forgettable as love interest Vicky Vale, while the true glory of this movie lies not in any one performance, but in that this movie made Batman cool again.  It brought a whole new generation of readers to the delightful world of comics, and opened the door for geeks who knew nothing but that world to interact with others who, like me, were just getting started. 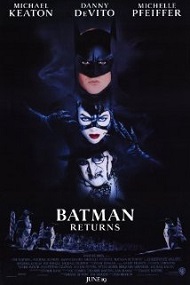 Tim Burton and Michael Keaton return, bringing with them the same delightful mix of dark gritty realism and cartoonish weirdness.  Along for the ride this time around are Danny DeVito as a fiendish and rather gross Penguin, Christopher Walken as corporate shill Max Shreck, and Michelle Pfeiffer as a conflicted Catwoman.  Double meow.  This film falls short of achieving the glory of its predecessor, as most sequels are wont to do, but one thing that need be mentioned about the Burton Batman films is the extraordinary score done by Danny Elfman.  One final note.  The Red Triangle Gang, the Penguins henchmen comprised of circus themed villains, scare me to this day.  Cause…clowns.  Not as re-watchable. 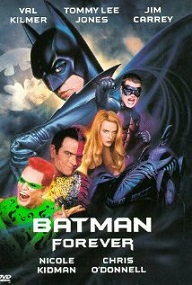 And here we go into the steep decline of Batman film history.  After two wildly successful films by Burton, Warner Brothers decides to switch directions and go with Joel Schumacher at the helm.  I can just imagine him walking in on day and saying: “What the Batsuit needs is nipples!” and instead of people slapping him and telling him how ridiculous that is, they went with it.  This could have been a good movie judging from the cast.  Val Kilmer plays the title role in his somewhat dry manner, and is offset by a stunning and seductive Nicole Kidman playing psychiatrist Chase Meridian.  This movie introduces Chris O’Donnell as Robin, injecting some youth to the cast, while Jim Carrey also dons tights as the Riddler, and Tommy Lee Jones as Two-Face…who looks like some bizarre cross between a lawyer and a purple zebra.  But despite the decent casting…this movie is just bad.  But not as bad as it could be… 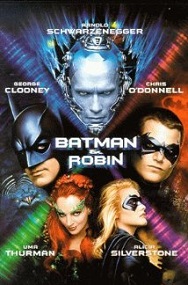 0 Shuriken: I cannot think of a single bright moment to give this even one Shuriken. 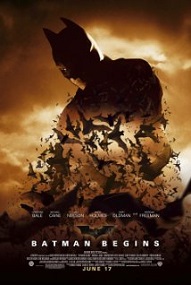 What’s this you say? That was the last of the horrible Batman movies? Joy and rapture!  After nearly a decade for people to forget Batman & Robin, director Christopher Nolan took the franchise into the new millennium with a gritty, realistic, back-to-basics stance on Batman.  No cheese, no campiness, just a Batman that will kick you in the teeth and have you begging for more.  We get to see the journey that a child takes to being a young man having to deal with the anger and pain of having watched his parents murder, and how he transitions to become a creature of the night, and take his first steps to right wrongs and fight injustice in a corrupt Gotham City, which is as much a character in this film as anyone.  I didn’t like the cinematic choices where we don’t really get to see Batman fighting because the camera is so close to the action.  I get the stylistic choice, I just don’t like it. 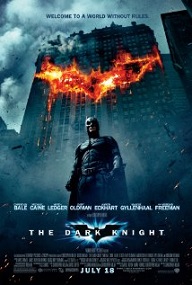 The most recent foray into the world of Batman takes us into the darkest chapter to date.  We are introduced to Heath Ledger as the Joker.  When I first heard that particular casting decision I admit I was more than skeptical.  I think I said: “No WAY pretty boy Ledger can play the Clown Prince of Crime.”  Not only did I have to eat those words, I choked on them, as not only did Ledger give the best performance of his career, he studied insanity and depravity to such a degree in preparation for this role, it lead in part to his untimely death.  Aaron Eckhart as Two-Face was a breath of fresh air after the Tommy Lee Jones version, performed as he should be: equal parts rational and crazy.  The story line weaves from one arc to the next, and you never are allowed off the edge of your seat.  The only flaw in this film is that it is a bit disjointed.  You feel like it should have ended a few times before we actually get to the climax of the film…and by that time it feels anticlimactic.

9.5 Shuriken: this is as close to a perfect Batman movie as we have gotten. 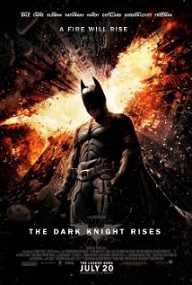 Once again, an eyebrow was raised when I heard Anne Hathaway was to play Catwoman, but then I decided to wait and see.  The opening action introducing Tim Hardy as Bane was fracking epic.  Then the story just gets strange.  Trying to follow the plot of this film and have it make sense is more difficult than suspending the disbelief of a magical knee brace suddenly transforming Bruce Wayne from a cane-dependent weirdo to the butt-kicking Batman.  The whole “Robin” twist at the end felt hokey.  The Thalia Al-Ghul reveal was contrived to the nth degree.  I think the main beef I have with this film is that Batman doesn’t feel like BATMAN anymore.  It’s more like some other character that is trying to be Batman.  Batman doesn’t take 8 years off from kicking crime in the junk. 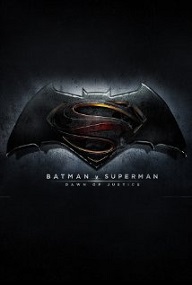 I wanted to like the Zac Snyder Superman film that is the predecessor to this upcoming release, but SO MUCH SHAKY-CAM.  Put the damn camera on sticks and just shoot the scene.  Even the touching dad and son moments were all shaky and “documentary” style.  I just couldn’t get over it.  That even trumps my other major gripes with the film like the utter devastation of Metropolis and the fact that Supes flat out kills Zod.  NOT ALL FILMS NEED TO BE GRITTY!  Superman should be the bold, primary color wearing beacon of hope and goodness.  And now in the sequel, we will see him take on Batman.  And as the trailer teased, the look of Batman in this film is very reminiscent of the seminal Frank Miller tale The Dark Knight Returns.  Which seemingly would be great.  Everyone loves that story.  But DC hasn’t put in the groundwork to make it viable.  The assumption of The Dark Knight Returns is that you already know a lot about the two heroes, so when you see Supes taking orders from Ronald Reagan… you know that’s just Big Blue being a Boy Scout.  But they haven’t established enough character background in the cinematic universe yet for the casual film-goer to make that jump.  And somehow all the rest of the Justice League will be in the film as well.  I’m very cautious of this.  As great as the Marvel films have been with each film tying into the next to create a cohesive cinematic universe, DC feels like it just wants to skip all the preliminary world-building that made Avengers work, and just cut right to a Justice League movie.

But still…I’ll see you at the theater! 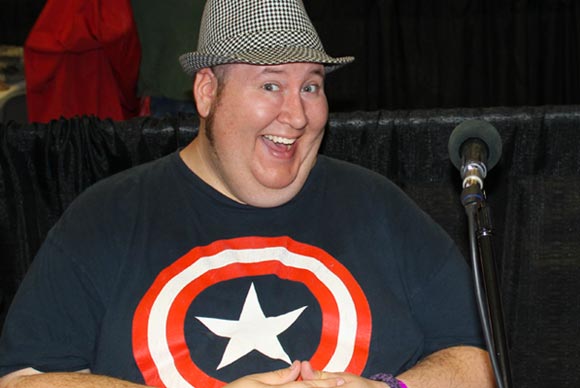 About the Author: Noah

Noah is obviously not an Anomaly... he is what we refer to as a "Singularity". Noah knows that the ninja walks the fine line between hero and villain. That’s why he loves them both.